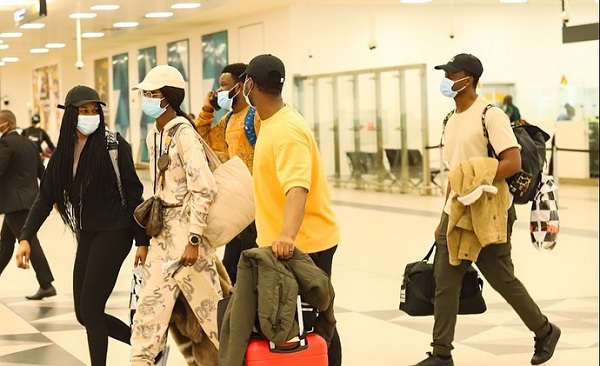 The 12th batch of 17 Ghanaians who were evacuated from Ukraine has arrived in the country.

The latest batch, which arrived at the Kotoka International Airport in Accra last Wednesday, brings the number of Ghanaian evacuees who have returned home to 210, the Ministry of Foreign Affairs and Regional Integration has confirmed.

The Director of the Information and Public Affairs Unit of the Ministry of Foreign Affairs and Regional Integration, Mrs Worwornyo Agyeman, who welcomed the students on behalf of the government, gave an assurance that measures had been put in place to safeguard their mental health.

She also added that efforts were being made to ensure the continuation of the education of the students among them.

A Psychiatrist with the Mental Health Association, Dr Kwaku Brobbey Asenso, also informed the students about arrangements that had been put in place to help ease the psychological trauma they had suffered from the war in Ukraine.

More than 1,000 Ghanaians were studying or working in Ukraine before Russia invaded the country on February 24, 2022.

Ghana, like other countries, had asked its citizens in Ukraine to run for cover while the government found means of evacuating them.

The first batch of 17 evacuees arrived last Tuesday in the capital, Accra, on two flights.

Since then, there have been evacuations, with Ghanaians arriving in the country from countries near Ukraine on March 4, 5, 7 and 8.

However, the ministry in a statement dated March 8, 2022, said some Ghanaian students living in Ukraine who were scheduled for evacuation had refused to show up.

According to the ministry, the students had expressed willingness to be evacuated and for that reason, air tickets were purchased on their behalf but they failed to show up at the airport on the scheduled date.

“The ministry has noted with grave concern the refusal of some Ghanaian students to show up at the airport after they have expressed their willingness to be evacuated. This has resulted in the government purchasing air tickets which remain unused, as well as paying for COVID-19 tests for persons with no intention of travelling,” the statement said.

It mentioned that only Ghanaians who were willing to be evacuated should confirm their participation in order not to waste public funds.

It added that the government would only bear the cost of two nights’ hotel accommodation for Ghanaians who were received by its staff and representatives and lodged in hotels in the neighbouring countries of Ukraine and other European countries.

It further warned that the government’s obligations towards those who refused the offer to be assisted to return home would cease on the expiration of the two nights’ hotel accommodation.

The statement also noted that some Ghanaians who were stranded in Sumy, close to the Russian border, had commenced their journey to Myrhorod, where they would be transported to the western border cities for onward transfer to neighbouring countries.

The government further expressed appreciation to the various National Union of Ghana Students chapters within the region, the Church of Pentecost and other religious bodies, governments, humanitarian organisations and individuals that have made the evacuation possible.