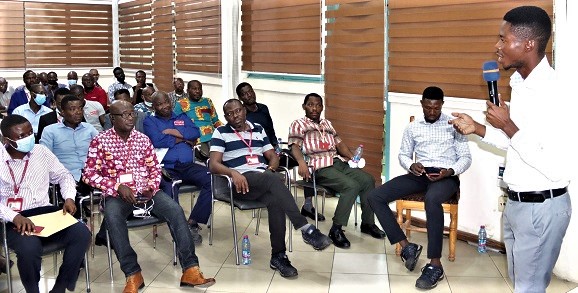 The Mirror, a brand newspaper of the Graphic Communications Group Limited (GCGL), and the Medi Moses Clinic and Prostate Centre, have organised a prostate screening exercise for the male staff of the GCGL.

Participants underwent an ultrasound scan of the prostate to check for irregularities in the prostate, after which those who had problems with their prostate were given advice and drugs.

The event, which saw over 80 men participating, formed part of The Mirror's mandate as a social and family newspaper.

A medical officer at the Medi Moses Clinic, Dr Collins Adankwah, who gave a talk on prostate health, said the prostate produced 30 per cent of the fluids that carried sperms cells from the testes.

He said the main prostate-related infections were prostate gland inflammation (prostatitis), prostate enlargement and prostate cancer, explaining that infections in the bladder and the urethra, when left untreated, could extend to the prostate, causing inflammation of the gland.

He said any prostate that weighed 40 grammes and above was enlarged.

Dr Adankwah explained that although the exact cause was unknown, certain risk factors increased the chances of prostate-related infections.

Those factors, he said, were in two forms — modifiable and non-modifiable — explaining that the modifiable ones included increased intake of fatty foods and sugar, low fruit and vegetable consumption, alcohol intake, smoking and lack of bodily exercise.

"There are some factors, however, which nothing can be done about. The first is being a man, being a black man, family history of prostate and increasing age," he stated.

He also explained that men who engaged in frequent sex had a lower risk of contracting prostate-related infections.

In severe cases, the urine ceased to flow and built up in the bladder, which in turn caused severe lower abdominal pain, he further explained.

At that stage, he said, either a catheter was inserted in the penis or a surgical procedure was carried out to drain the urine.

"Once you have a prostate, you are at risk of contracting prostate infections," he said, adding that a PSA blood test, biopsy and ultrasound and CT scans were available for testing.

The Assistant Editor of The Mirror, Hadiza Nuhhu-Billa, explained that most screening exercises organised by the newspaper in the past were women-related, so with Father’s Day approaching, it decided to organise an exercise for the men in the GCGL to create awareness of prostate health.

She advised men to take very good care of their bodies and regularly visit health facilities for prostate screening for early detection and treatment.
She further encouraged men to speak frankly to doctors about issues relating to their prostate health for proper care to be given them.

A staff writer with the Daily Graphic, Vincent Amenuveve, who participated in the exercise, said it had been a very enlightening experience.

He said he had realised that certain lifestyle choices he had made were wrong and he was going to change.

The Director, Marketing of the GCGL, Franklin Sowa, lauded the initiative of The Mirror, adding that it served as a reminder and a check on men to take responsibility of their bodies and take good care of them.

"One new thing that I have picked up today is that the blood test does not necessarily mean that the gland size is okay; it only gives an indication of the cancerous challenge.

“So you may have a very good report from the PSA test, but the gland itself may be slightly enlarged," he said.

He expressed the hope that more of such exercises would be organised more frequently.