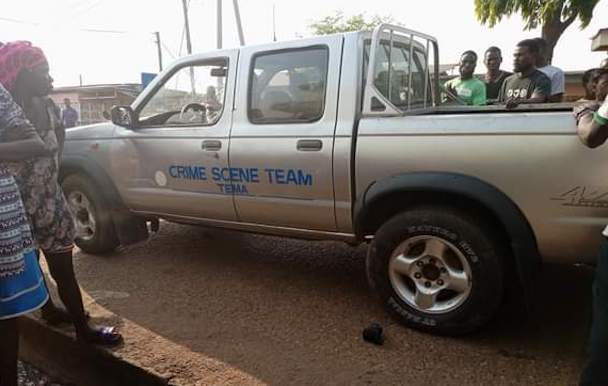 Police in the Tema Region have started investigations into the death of a 36-year old man identified as Abdullah Gado alias ten years who is suspected to have been lynched by a mob.

The deceased was allegedly lynched after his body was found dead in front of Ashaman Pentecost Church in Tema Newtown at about 7:30 on Sunday, December 27, 2020.

The body was lying in supine position with multiple wounds on his body, swellings on the his right elbow with a dead ash male cat beside him when a team of police officers arrived at the scene.

Bloody stains were also seen on three cement blocks suspected to have used to lynch him.

The Acting Public Relations Officer of the Tema Police Command, Chief Inspector Stella Dede Dzakpasu who confirmed the incident to the GraphicOnline said police investigators who arrived at the scene took photographs of the crime scene and later conveyed the body of the deceased to the Tema General Hospital where the body was examined by  the medical Officer  on duty who pronounced him dead.

She said the body was later deposited at the Mortuary for preservation and autopsy.

Chief Inspector Dzakpasu adviced the public to desist from lynching and called on residents who witnessed the lynching or have any information about the incident to that contact the Tema Police on 0542719093 to assist the police in their investigation.

Meanwhile some residents have alleged that the deceased was lynched for allegedly stealing the cat, a claim that is yet to be substantiated by the police.