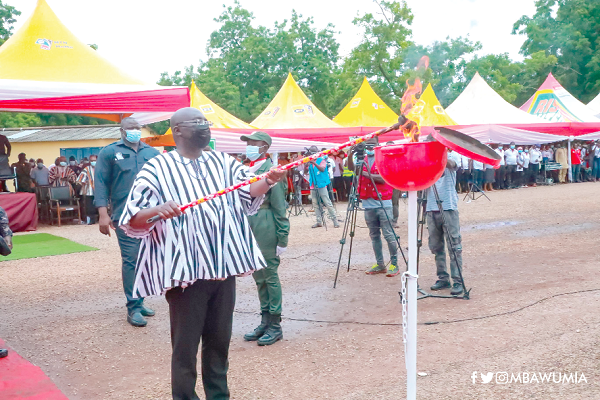 The Vice-President, Dr Mahamudu Bawumia, did the launch at the school in Tamale, the Northern Regional capital, last Saturday.

An old student himself, Dr Bawumia said the government’s reforms in the educational sector were anchored on science, technology, engineering and mathematics (STEM) to prepare the youth to become active participants in the Fourth Industrial Revolution.

"The Ministry of Education is in the process of setting up 11 model state-of-the-art STEM senior high schools across the country, with well-equipped laboratories," he said.

The Vice-President added that a basic STEM (B-STEM) programme was also being introduced at the basic level to ensure the use of robotic kits, electronics and computers in teaching and learning.

He explained that the reforms were necessary to develop learning in contemporary skills, creativity, critical thinking and communication to drive the country to economic prosperity.

The Vice-President also inaugurated a GH¢2.8 million 600-bed girls' dormitory, which was constructed and furnished by the MTN Ghana Foundation as part of the company’s corporate social responsibility to the school.

He acknowledged MTN Ghana for its tremendous support and said over the years it had made significant investment in the provision of critical infrastructure in the educational sector to facilitate effective teaching and learning in schools.

Dr Bawumia said the project also demonstrated the company’s determination and effort in promoting girl-child education in the country.

"Your contribution has gone a long way to complement the government’s effort at promoting effective teaching and learning in schools," he added.

According to the Vice-President, the overall vision of the government was to reposition the educational system to produce assertive and empowered students with the relevant skills needed for the socio-economic transformation of the country.

He said the dormitory would help improve the lives of female students of the school to achieve their ambition of attaining academic excellence.

Mr Adadevoh said the MTN Ghana Foundation was committed to empowering young people through partnerships and investments in infrastructure, adding: “I would like to assure you that you will continue to see MTN corporate investment in many communities everywhere you go."

The board of governors of TAMASCO named one of the dormitories Bawumia House in honour of the Vice-President for his immense contribution to his alma mater.

The Headmaster of the school, Rev. Edward Azeka, said the honour done Dr Bawumia befitted a man who had exhibited extreme competence, humility, honesty and tolerance in all his endeavours, both in his public and private life.