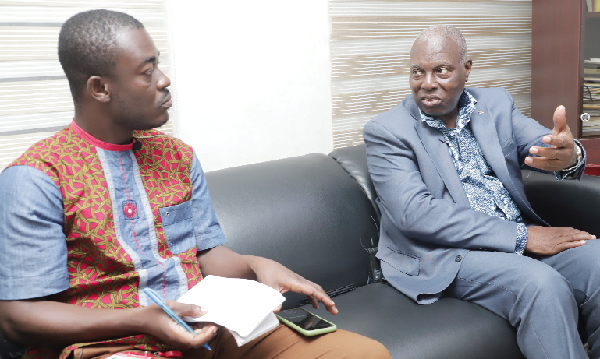 Dr Barfuor Adjei-Barwuah (right), a former Ambassador to the United States of America and Japan, being interviewed by Ebo Hawkson, reporter, Daily Graphic, at the Head Office of the GCGL. Picture: SAMUEL TEI ADANO
30.5k Shares

A statesman and former diplomat, Dr Barfuor Adjei-Barwuah, has decried the absence of a workable sustainable national development plan throughout the country’s history.

In an exclusive interview with the Daily Graphic, the former Ghana’s Ambassador to the United States and Japan described as unfortunate the lack of any concerted effort to have a plan that would rally all citizens to work towards its achievement.

According to him, what leaders had tended to do was implement policies that had kept the territorial integrity of the country, without any sustainable development agenda.

He also noted that projects and programmes implemented for decades were based on party manifestos and not a development plan, as was the case in other countries.

For instance, the former lecturer at the University of Ghana and the Bexley College, London, said if the country had, since independence, made a conscious effort to build, say, 10 kilometres of first-class roads every year, linking all regional capitals, as captured in a well-documented development plan, it would have had 600 kilometres of quality roads linking all regional capitals and making the capitals accessible.

Dr Adjei-Barwuah, who was appointed by President Nana Addo Dankwa Akufo-Addo as Ambassador to the US in 2017, said it was sad that the country seemed to be falling behind and losing its prestige due to lack of concerted efforts from all to develop and help it move forward.

On the governance system of the country, he said there was not much difference between the two dominant political parties, the NPP and the NDC, adding that there seemed to be “more talking than working in the country”.

Dr Adjei-Barwuah, who is also a distinguished statesman in Residence, Social Science and Policy Studies Department of the Worcester Polytechnic Institute in the United Kingdom, gave the advice when he shared some insights on a wide range of topics bordering on the economy, politics and social issues in an exclusive interview with the Daily Graphic last Friday.

On the many challenges bedeviling the country, the 2008 presidential aspirant of the NPP and former Ambassador said the time was now ripe for the country to fully harness its natural and human resources in order to become self-reliant in all aspects of the economy.

Referencing the COVID-19 pandemic and the Russia/Ukraine war, he said such a move would also offer the country the buffer to withstand global shocks which always derailed economic progress anytime they struck.

He said the rich human and natural resources available to the country, coupled with the relative peace and stability it had enjoyed over the years, should be a catalyst for growth and sustainable development.

Pointing to the failure on the part of leadership to recognise the country’s agricultural potential, for instance, he declared: “We are a country that has no reason to be poor.”

“We are a country that has so much arable land. This is a country where if you stick a cassava stick anywhere in the ground, you will be harvesting cassava in no time,” Dr Adjei-Barwuah stated.

“Yes, sometimes you do have a certain kind of difficulty with the economy. But I, for one, will hesitate to pin our problems on the pandemic and the Russia/Ukraine war,” he said.

While acknowledging the impact of externalities on a country’s economic performance, Dr Adjei-Barwuah said the challenges confronting the country were on a global scale but added that what could have contributed to lessening the pain was how leadership handled them.

For instance, he said, there ought to be concerted efforts by all to help tackle the challenges, instead of wailing every day as if all was lost.
“So even though the Russia/Ukraine war and the pandemic have caused us problems, I don't think we should be up to the point where everybody you talk to tells you in Twi: ‘Times are hard’," he said.

On the issue of Ghana going to the International Monetary Fund (IMF) for support, Dr Adjei-Barwuah described the move as unfortunate, particularly when the government had decided not to seek such support after the last one under the previous regime.

He said going to the IMF was an indication that the country had given up on working harder to surmount the myriad of challenges that it was confronted with.

“I don't think we tried enough, probably both as a corporation and as a country. So I think going to the IMF when we have said we were never going to go there constitutes a certain kind of unfortunate recession of our view, of our own lives in our country's future,” he stated.

“Now that it hurts, it basically means that we ought to be able to work harder to make sure that it never happens again,” the retired diplomat said.

He added that one of the best ways to help the country to stem the current tide and avoid going for an IMF assistance again in the near future was for institutions and the people to work.

“One thing that I've noticed is that there doesn't seem to be anything in national life in this country which does not have some kind of organisation taking care of it,” he noted in reference to the way some private sector companies had taken over the work of some state institutions.