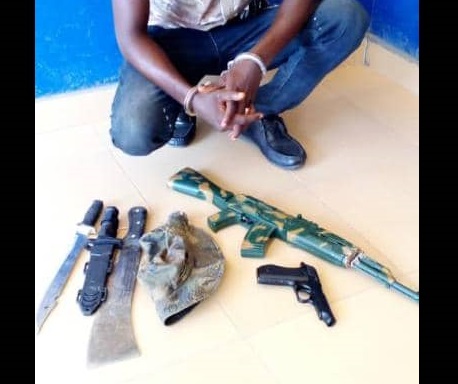 The police in the Upper East Region has arrested a suspected illegal arms dealer. He is said to be the one who has been selling arms to help fuel the protracted Bawku conflict.

He was arrested on the Tamale-Bolgatanga highway while he was in the process of selling arms to one of his customers, the police said.

According to the Police, a combined motorbike and vehicle patrol teams monitored and apprehended the suspect.

A search conducted in the suspect’s room at Zorbisi, a suburb of Bolgatanga, led to the retrieval of one unmarked foreign pistol, two jack knives, a cutlass and a plastic toy rifle.

The suspected customer who was patronizing the suspect is on the run and a manhunt is underway to arrest him.

The Public Relations Officer (PRO) of the Upper East Regional Police Command, Assistant Superintendent of Police (ASP), Mr David Fianko-Okyere explained that Dinka, a native of Bawku, the capital of Bawku Municipality, is alleged to be a supplier of arms and ammunition to fuel the protracted violent Bawku chieftaincy crisis which had been lingering for many years.

He stated that a search conducted in suspect’s room at Zorbisi, a suburb of Bolgatanga, led to the retrieval of the exhibits.

He said “the suspect will be arraigned before court in due course as the police had initiated a manhunt for the arrest of the suspected customer who is currently on the run to be put before court too”.

ASP Fianko-Okyere further entreated the public to help the police with information on the suspect and his activities.