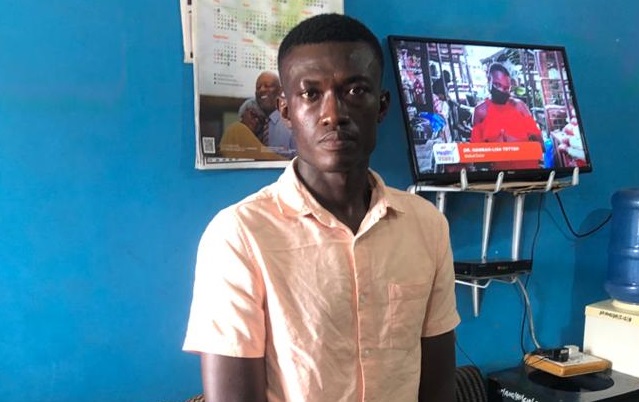 Appiah after he was arrested
30.5k Shares

A 28-year-old architect has been arrested at Abesim near Sunyani for allegedly killing about three children and keeping some meat suspected to be human  in a fridge.

The suspect, Richard Appiah who is also a surveyor is alleged to have murdered his stepbrother and two other boys aged between 12 and 15 years.

The body of one of the victims was cut into pieces and some of the parts allegedly kept in a double door fridge found in one of the rooms in the house where Appiah lived.

Appiah was arrested by some relations of one of the victims aged 12 and other members of the community.

A relative of one of the victims is said to have reported to the Sunyani police about his missing son on August 20, 2021, at about 10:10 pm.

He told the police that Appiah had come for his 12-year-old son at about 5:30 pm but the young boy could not be traced.

About an hour and a half later, some relatives of the suspect returned to the police station with Appiah on suspicion of knowing the whereabouts of the 12-year-old boy.

Police together with the complainants and suspect proceeded to Appiah's rented self-contained house at Alaska area near Abesim and found the boy dead and lying in a supine position in one of the rooms.

A search in the house found another deceased having been murdered and kept in one of the rooms.

A further search in the room led to the police finding pieces of meat suspected to be human parts of a different person in a double door fridge.

The Police in collaboration with some members of the community arrested Richard Appiah, the suspect, who is currently in Police custody assisting investigations.

He has also commended the police and the community for the swift response in arresting the suspect, saying that civil-police collaboration should be deepened to promote peace and security in society.