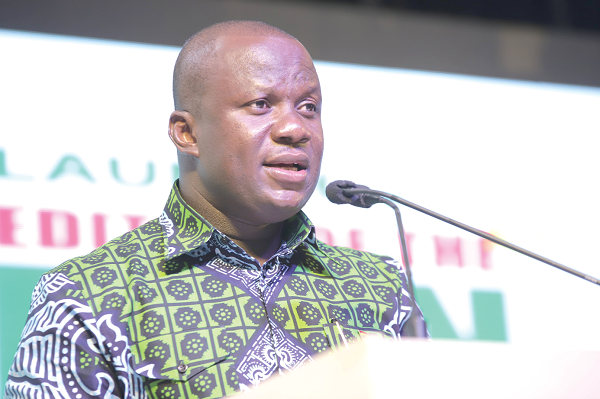 The Minister of Lands and Natural Resources, Samuel Abu Jinapor, has extended the time for the submission of an investigative report on the Bulgarian Embassy land matter by one week.

Consequently, the sole inquirer into the case, Justice Kwasi Anto Ofori Atta, now has until April 26, this year to present his report.

Justice Ofori-Atta was appointed on March 18, this year and given one month to present the report on the Bulgarian Embassy land, which is at the centre of a dispute between the embassy and a private developer.

He was given seven days to present his report and one month for the report on matters relating to lands occupied by diplomatic missions in Ghana.

Read also: Govt has no hand in demolition of Bulgarian Embassy in Accra - Foreign Affairs Ministry

However, the Public Relations Unit of the Ministry of Lands and Natural Resources told the media yesterday that the minister had extended the time upon a request by the sole inquirer.

"Following the commencement of his investigations, the sole inquirer says he found the issues considerably complex and needed more time to deal exhaustively with all the issues," the Head of Public Relations at the ministry, Abraham Otabil, said.

Mr Otabil said the minister was hopeful that the extension of the date for the submission of the report would help the sole inquirer to get "the full facts to enable him to act decisively and comprehensively on the issue".

He assured members of the public that Mr Jinapor would ensure that all the questions which needed answers would be addressed when investigations were concluded on the matter.

The Bulgarian Embassy, located at Kakramadu Road, Plot No. 10, East Cantonments in Accra, was demolished by a private developer in 2017.

Following the protracted nature of the dispute over the land, the Lands Commission ordered the developer to stop work on a redevelopment project on the site.

In the afternoon of Wednesday, March 16, 2022, a Deputy Minister of Lands and Natural Resources, Benito Owusu-Bio, and his counterpart from the Foreign Affairs Ministry, Kwasi Ampratwum-Sarpong, visited the site to stop the private developer from continuing with work.

Justice Ofori-Atta was tasked to, among other things, undertake a full and impartial inquiry into the alleged encroachment and or demolition of the property on the land being used as the Bulgarian Embassy.

Also, the terms of reference required him to make appropriate recommendations relating to the land being used as the Bulgarian Embassy, inquire into the nature of interest in any land held or occupied by diplomatic missions in Ghana, inquire into any matter relating to land in which diplomatic missions in Ghana have an interest whatsoever and make recommendations to the government.