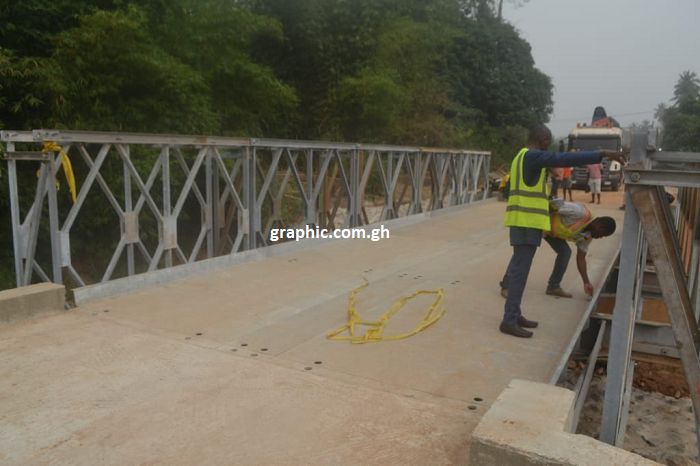 Work on the construction of a single-lane bailey bridge over the Okye River at Ochisoa on the Breman Asikuma-Akyem Oda road has been completed.

The bridge, which was constructed by the Bridge Maintenance Unit of the Ghana Highway Authority (GHA) at a cost of GH¢537,000, replaces a concrete bridge which got damaged after the river overflowed its banks following a downpour on September 14, 2019.

Although the work on the project has been completed, it is yet to be opened to traffic since the Works Department of the Asikuma Odoben Brakwa Assembly is in the process of filling the sides of the road to ease movement on that stretch.

During a visit by the Daily Graphic yesterday, an Engineer at the GHA, Mr Isaac Brown, who supervised the work, said the first phase of the project had been completed and that the bridge was ready for use.

He noted that the work was executed to specification and had been handed over to the assembly for use to bring relief to commuters.

The completion of the bridge will put an end to the situation where motorists and pedestrians had to use a longer and winding alternative route through Benin to Asuoko-Jamra to reach their various destinations.

Mr Brown stated that the remaining work was filling and stone-pitching of the embankment of the bridge to prevent mudslides.

The supervising engineer expressed worry that the main bridge, which was currently in a poor state, could collapse at any time and needed to be replaced in the shortest possible time.

“Although the construction of the main project has been captured in the second phase of the project, it must be attended to as quickly as possible to prevent any emergency situation from occurring,” Mr Brown appealed.

The District Chief Executive (DCE) for Asikuma Odoben Brakwa, Mr Isaac Odoom, expressed his gratitude to the government for responding to the situation by releasing funds towards the construction of the bridge.

“Owing to the narrow nature of the road leading to the bridge, I wish to call on the GHA to construct a crush barrier on that stretch to prevent moving vehicles from falling onto either sides of the road,” the DCE appealed.

The Member of Parliament (MP) for the area, Mr Anthony Effah, indicated that the assembly would follow up on the second phase of the project to ensure that it was executed.

The MP further commended the residents for their patience as the government took steps to fix the collapsed bridge.

A resident, Mr Kweku Agyako, added his voice to the call for the government to expedite the process towards the construction of the main bridge which had turned into a death trap as a result of serious cracks in it.

A driver, Mr Obed Nyarkoh, lauded the government for the new bridge as it would reduce both the cost and time of travelling on the road.

Background
The 79-year-old concrete bridge over the Okye River collapsed on September 14, 2019 after the river overflowed its banks following a downpour.

The bridge links nearby communities in the Asikuma Odoben Brakwa and Birim Central districts in the Central Region and the Birim South District in the Eastern Region.