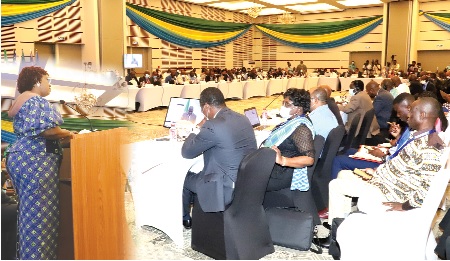 Ministers of Fisheries and Aquaculture and some senior officials of the Organisation of African, Caribbean and Pacific States (OACPS) have begun deliberations in Accra on how to improve sustainable fisheries governance.

The seventh conference is on the theme: "OACPS Blue Economy Agenda 2030 – Catalysing sustainable fisheries and aquaculture development for the future”.

Participants at the two-day technical meeting will exchange views on scaling-up sustainable and inclusive fisheries and aquaculture value chain to transform food systems.

They will also consider a draft OACPS strategic plan for fisheries and aquaculture 2030.

The meeting is part of the biennial OACPS Ministerial conference scheduled for Accra from April 5 to 8, 2022, which will be attended by policymakers from 79 countries, including 48 from Africa, development partners and international organisations.

The Minister of Fisheries and Aquaculture Development, Mavis Hawa Koomson, said the fisheries sector played significant roles in the member countries of OACPS, where fish and fishery products constituted one of the most-traded food commodities for export.

Unfortunately, she said, fish production around the world had been declining, with many developing countries also experiencing a reduction in profits.

She mentioned some of the factors affecting the sector including illegal, unreported, unregulated (IUU) fishing, climate change, ocean pollution and marine degradation.

The promotion of aquaculture development, she said, was increasingly being considered by many countries as the best alternative to increased fish production, reduction in fish imports and creation of jobs and wealth.

Mrs Koomson further said although aquaculture was considered the best alternative to the overdependence of countries on marine fishery resources, inadequate aquaculture infrastructure, low technical capacity, high cost of inputs, especially fish feed, low capacity to manage the outbreak of diseases and weak enforcement of regulatory measures continued to affect the development of the sector.

The Assistant Secretary-General of the OACPS, Ms Cristelle Pratt, said the organisation placed special importance on the fisheries sector, as it ensured food security and nutrition, employment, trade and livelihoods in member countries.

She said the meeting would provide guidance for the OACPS in their engagements in multilateral processes at the global level during the negotiation of various governance frameworks that had a direct bearing on the sustainable development of fisheries and aquaculture.

At the meetings, Ms Pratt said, 10 policy issues would be tabled for consideration by members.

"Fostering a common understanding and making the best use of our experiences and knowledge and learning from these is critical to realising the full potential of the fisheries and aquaculture sector for national development," she added.

The Executive Director of the Fisheries Commission, Mr Michael Arthur-Dadzie, recalled that at the 6th OACPS meeting in Samoa in 2019, member states were encouraged to support aquaculture infrastructure and breeding, as well as the establishment of a reliable supply of fish feed and quality fingerlings.

According to him, Ghana had since established four additional new and operational public fish hatcheries.

Later in an interview, the Chief Fisheries Officer of the Caribbean Commonwealth of Dominican, Mr Jullan Defoe, said the meeting would be beneficial to member countries since they would share ideas based on their common goal to help develop and promote best practices to sustain the sector.