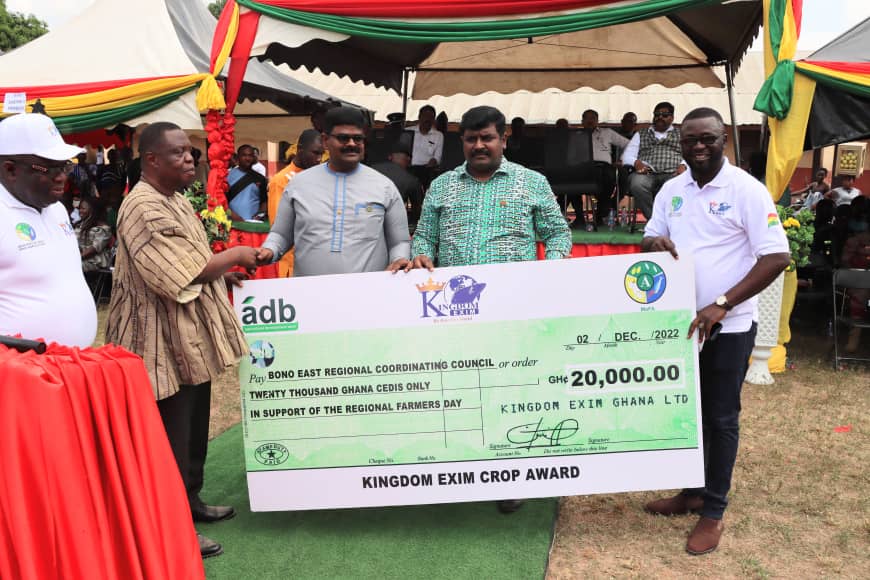 This year’s Farmers Day celebration theme was "Accelerating Agricultural Development Through Value Addition". It was celebrated on December 2, 2022, in Koforidua in the Eastern regional capital.

Kingdom Exim Ghana Limited, the mother company of the Kingdom Exim Group, a leading West Africa-based quality-focused Agro products exporter and supplier, with its head office in Tema-Ghana, and pronounced presence in the West Africa sub-region, has grown from a company to a Group of Companies since its advent in 2008.

Kingdom Exim Group has supported the government of Ghana at the national, regional and MDA levels in organizing the 38th National Farmers' Day Celebration with approximately GHS500,000.00.

This support specifically covered three regions and seven MDA’s. The regions are, the Bono East, Ahafo Region and Upper West Region, aside from the national support.

The total cash support Kingdom Exim Group made to the regions, MDA’s and at the national level celebration were aside other donated packages such as pesticides, weedicides, and logistics to some Farmers.

In an interaction with the media at this year's celebration, the Chief Executive Officer (CEO) of Kingdom Exim Group, Dr. James Rajamani, who also doubles as the Chairman of the India Africa Trade Council (Central and West Africa), expressed his profound appreciation to the government of Ghana and the country's gallant farmers who have collaborated with Kingdom Exim Group to provide the right agro-commodities for the international market.

He observed that the working relationship between Kingdom Exim Group and Ghanaian farmers over the years have been mutually beneficial, pledging the group's continuous support towards the well-being of farmers and residents of communities within it’s operational enclaves.

Dr. Rajamani noted that "it is not only necessary, but befitting to give back to the community within our operational enclaves", underscoring the fact that corporate social responsibility is key on the agenda of Kingdom Exim Group.

On his part, the Managing Director of Kingdom Exim Group, Dr. Immanuel Rajamani, assured farmers and the government of Ghana that there was a resolve to build the capacity of farmers and sensitize them on the need to improve and maintain Good Agriculture Practices, to meet international farming standards in order to survive on the world market.