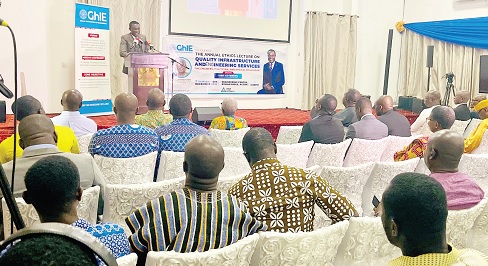 The Special Prosecutor (SP), Kissi Agyebeng, has underscored the need for stringent ethical behaviour at workplaces and in society to curb the rising incidents of greed and parochial interest which are negating the fight against corruption.

He said the lack of defined ethical behaviour at workplaces and in society begot morally opprobrious conduct.

“Not only that; the lack of ethics also engenders greed and individual interest. It encourages the setting aside of regulations and lowers standards, and none of it promotes a morally sound society,” he said.

Mr Agyebeng made the call when he delivered an ethics lecture to engineers at the Engineers Centre last Thursday.

He delivered a paper on: “Quality Infrastructure and Engineering Services: The Engineer, Politician and Ethical Behaviour.”

The Annual Ethics Lecture has been instituted by the Ghana Institution of Engineering (GhIE) to provide a platform for seasoned speakers to bring to bear the importance of ethics and how its strong foundation can reduce corruption in society.

It is also to bring up conversations on the civil construction space and perceived corruption.

It brought together engineers and other stakeholders, among them the President-elect of the GhIE, Michael Dedey; the Vice-President of the GhIE, David Kwatia Nyante, as well as past presidents and council members of the institution.

Mr Agyebeng stressed that the lack of ethical standards bred corrupt-collusion between the politician and the engineer through the inordinate batter of promise-for-promise bribery and illicit enrichment, to our collective impairment.

He added that it was practically impossible to weed out corruption in the country, but his outfit would make it costly and unattractive for people to engage in it.

“There is no way to stop corruption; however, we will make it costly, a high risk activity,” he emphasised.

He said to achieve that, it was important for organisations to have and strictly enforce ethical codes, while society also promoted its values to include honesty and promoting the nation’s interest, instead of parochial interests.

In his address, the Chair of Professional Practice and Ethics Committee of the GhIE, Ludwig Hesse, reminded engineers to uphold the highest standard of integrity in the practice of engineering and order their conduct in accordance with the Code of Ethics of the institution.

A former Minister of State, Elizabeth Ohene, who chaired the event, said there were always engineering solutions to problems surrounding the people, stressing that “if engineers do their work, we will be fine. It is only when engineers do not do their work that we won’t be fine”.