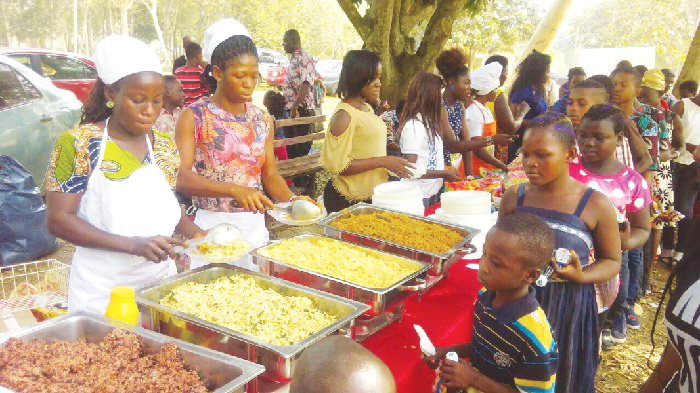 Orphans and vulnerable children being served at a party organised for them by an NGO, Building Lives Foundation, in Sunyani during Christmas
30.5k Shares

The Department of Social Development in the Brong Ahafo Region has threatened to close down more children’s homes in the near feature.

Already, the department which was formerly known as the Department of Social Welfare, had closed down six out of the 15 homes in the region due to improper management of the homes.

Currently, there are nine homes with 324 orphans in the region.

This was disclosed by the Deputy Brong Ahafo Regional Director of Social Welfare in charge of Child Rights Promotion and Protection, Madam Olivia Avudzega to the Daily Graphic on the sidelines of a Christmas party for needy children in Sunyani.

The party was organised by Building Lives Foundation, a non-governmental organisation with the aims of putting smiles on the faces of the needy children and orphans in the region.

The party was attended by about 250 deprived children and orphans drawn from five homes; namely Hanuka at Baakoniaba, Alafia and Ranah Ghana at Abesim, Compassion Is Love In Action at Yawhima and Abusa children’s home at Odumasi all in the Brong Ahafo Region.

The participants were provided with food and drinks amid dancing, while they also engaged in a number of competitions such as pick and act.

Madam Avudzega also explained that the rationale behind the ban on establishing new homes in Ghana was because of the realisation by the government that children who were raised from children’s homes lacked parental care and training on their responsibilities.

“Most a time when you go to these homes, the children are sitting watching television and playing games on the computer while the cooks prepare meals for them.”

“Workers of these homes also wash the dishes after children at the homes have finished eating,” she stated, saying that this resulted in the children’s inability to perform simple household chores such as cooking and washing of dishes.

Madam Avudzega, therefore, challenged community and family members to take care of orphans just as their own children rather than sending them to children’s homes.

“It is important to raise a child from their own homes where there is an opportunity for them to have contact with the families and community members,” she stated.

Madam Avudzega mentioned inadequate transport and funding as the main challenges confronting the department in the region.

She stated that with offices of the department in the 27 districts in the region, there was the need for adequate funding and means of transport to enable officials embark on periodic monitoring of the various children homes.

She advised orphans to strive to acquire the needed skills and knowledge to enable them to be useful to themselves and society in future.

Madam Avudzega thanked the foundation for organising the party for the orphans in the region and appealed to them not to focus only on orphans, but other vulnerable people in the various communities as well.

She again appealed to them and other NGOs, institutions, organisations and all those who can help to identify brilliant, needy children in the various communities and support them in their educational and vocational career.

The Chief Executive Officer (CEO) of the Building Lives Foundation, Pastor Victor Donkor, appealed to the incoming government to formulate policies and programmes that would help promote and protect the vulnerable and orphans in the country.

The foundation, according to him, was established to support under-privileged people such as orphans, widows, the vulnerable and the deprived in communities.

Pastor Donkor stated that the party was organised to put a smile on the faces of orphans and deprived people in this Christmas festivity.

He also added his voice to the call for philanthropists, traditionals rulers, churches and individuals to support the underprivileged in society.