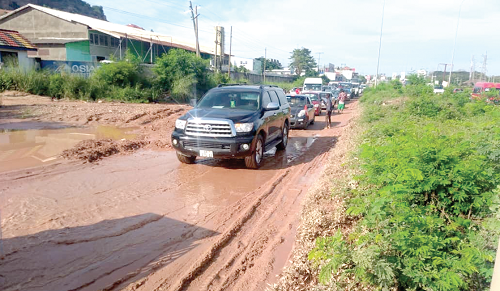 This is the main Kasoa highway overtaken by mudslide. Picture: Timothy Gobah

Another mudslide on the Kasoa-Accra highway last Thursday rendered a part of the road impassable after a downpour, which lasted for about 30 minutes.

There was heavy vehicular traffic on the highway due to heavy silt that poured on portions of the Kasoa-Weija stretch, forcing motorists to divert and take over one of the lanes of oncoming vehicles.

Even that arrangement by the drivers did not help, as there was a biting gridlock on that portion of the road yesterday.

The unusual vehicular traffic on the Resurrection Church Junction as early as 5 a.m. heralded the danger that lay ahead.

The road was completely covered with the mudslide, with only trucks attempting to weave through that horrifying development while cars detoured to take one lane of the opposite lanes for safety.

The five-kilometre Kasoa Brigade Mosque to West Hills Mall stretch, which should have taken an average of five minutes, took hours for motorists to cover due to the development on the road.

It was a chaotic scene as trucks tried to bulldoze their way, intimidating cars in the process until the police arrived to direct traffic and keep a resemblance of sanity.

This phenomenon of mud taking over that portion of the road has become a regular occurrence anytime it rains. Efforts by the Ga West Assembly to address it are yielding no positive result.

When the Daily Graphic arrived on the scene at 6:30 a.m yesterday, some vehicles were stuck in the mud on the road, thereby worsening the already bad situation.

A driver, Mr Kofi Amoah, who plies the Accra-Kasoa road, described the road a ‘terror’.

He said anytime it rained, the Tuba tollbooth was a major concern for drivers.

He said motorists did not make enough income during the rainy season, since a lot of time was wasted in vehicular traffic, adding that “today’s situation has been terrible”.

“You leave in the morning to work only to be met with traffic,” he said.

A trader, Ms Monica Donkor, said because of the traffic on the Kasoa road, she had to leave home as early as 4 a.m. so that she could reach Accra on time but added that last Thursday’s situation was “annoying.”

In a related development, a group calling itself Alliance of Drivers Ghana, has appealed to the government to relocate the tollbooth at Tuba, since it was a nuisance to motorists.

The leader of the group, Alhaji Yahaya Issaka, said the tollbooth was the cause of the deadly traffic jam on the stretch.

He said the situation was gravely affecting commercial drivers as well as other motorists who plied the road daily.

“The tollbooth is causing heavy traffic here. If you close from work and you are returning home you face this heavy traffic jam. We want this tollbooth to be removed immediately,” he said.