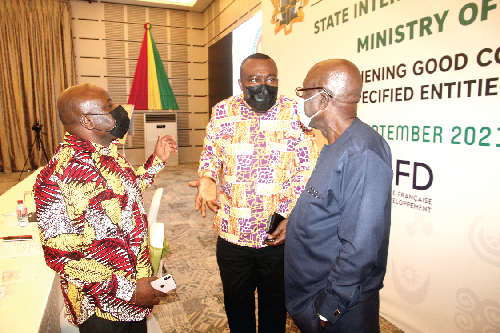 Governing boards and chief executives of state enterprises have been urged to embrace good corporate governance practices to enable them to meet their annual performance targets.

“State enterprises can only meet their targets and help grow the economy if they shift from accumulating debts and making losses to generating profits,” the Director-General of the State Interest and Governance Authority (SIGA), Mr Stephen Asamoah Boateng, has said.

“During your performance contract signing ceremony about one and a half months ago, the President expressed his wish to have specified entities play vital roles in funding government projects. Unfortunately, the Minister of Finance portrayed a very grim picture of state enterprises’ performance in financial reporting and the submission of audited accounts,” he said.

Mr Asamoah Boateng was speaking at a stakeholders' consultative workshop on a draft code of corporate governance for state enterprises in Accra yesterday.

The workshop, on the theme: “Strengthening good corporate governance practices in specified entities for national development”, was to afford stakeholders the opportunity to deliberate on the content of a draft code and offer suggestions on how to improve the document.

Mr Asamoah Boateng expressed disappointment at the apparent lack of interest in the draft code by governing boards and chief executives of state enterprises, for whom the document was being prepared.

He said the low level of attendance at the workshop was a testimony to how leaders of state enterprises ran their entities and also exposed the lack of discipline, especially for time, in the country.

There were only six chief executives and a board member, from the about 70 state enterprises, present at the workshop when a head count was done hours into the programme.

"There will be sanctions when this draft code is finally adopted and people go contrary to it; sanctions which will affect remuneration or even the dissolution of boards," Mr Asamoah Boateng said.

According to him, all 70 agencies which recently signed a compact with the government through SIGA would be bound by the code when it was eventually adopted.

Later in an interview, the Minister of Public Enterprises, Mr Joseph Cudjoe, told the Daily Graphic that it was the vision of the President to ride on the back of state enterprises to deliver on his mandate.

He said his outfit would soon launch a league table to assess the performance of state enterprises for them to lift their game.

For his part, the Chairman of Ishmael Yamson and Associates, Mr Ishmael Yamson, who facilitated the workshop, encouraged leaders of state entities to gradually shift from actions to outcomes by abiding by the rules and structures of their organisations.