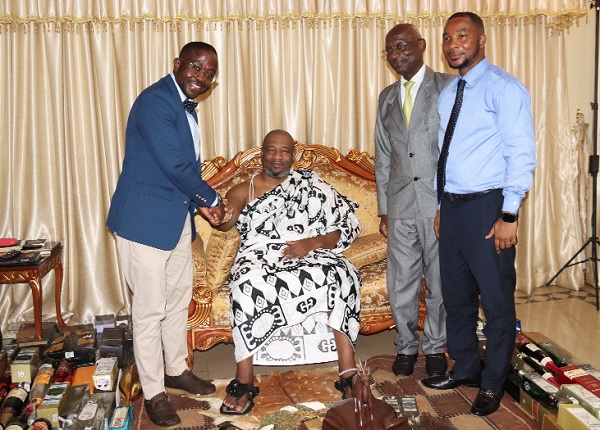 The Ga Mantse, Nii Tackie Teiko Tsuru II, has urged journalists to use media houses and platforms to promote the development of the Ga State and the entirety of the Greater Accra Region.

He said it was not enough that the media was always beset with negative reviews and criticisms, particularly with respect to legal issues among Ga traditional authorities.

“There are lots of developmental projects ongoing in the Ga State that people need to know about.

It should not always be about the bad things; there are good things happening too,” he said.

Nii Teiko Tsuru made the call yesterday when the newly appointed executives of the Greater Accra Regional chapter of the Ghana Journalists Association (GJA) paid a courtesy call on him at his residence in Accra.

The visit was to introduce the new executives to the king and to seek his support and guidance as they embarked on their new roles of spearheading the association in the region.

“Let a new narrative be written today, and my clarion call is for us to create a new path for the Ga State together,” King Teiko Tsuru said.

Mr Okine called on the Ga Mantse to support the GJA to effectively execute its mandate and help in the development of the Ga State and the region.

“The Accra Chapter of the GJA has been dwarfed over the years due to the presence of the national body, and for that we are seriously constrained; we have no office, no vehicles and no logistics,” he lamented.

He, however, said in spite of all the challenges, the regional chapter, with the support of the Ga Mantse, would contribute its quota to project the Ga State, its culture and its developmental agenda.

Mr Okine further called on Nii Teiko Tsuru to add his voice and influence to expedite investigations into the murder of undercover journalist, Ahmed Hussein-Suale.

The Chief of Protocol of the Office of the Ga Mantse, Sylvester J.K. Parker-Allotey, said it was high time the king’s office and the association developed a symbiotic relationship that would promote the development of the Ga State.

The Chief of Staff at the Office of the Ga Mantse, Justice Julia Naa-Yarley Adjei Amoah, said the king was currently undertaking various projects.

“His Majesty is pursuing many projects in education by offering scholarships to the youth, particularly young girls in ICT and entrepreneurship,” she explained.

Mr Cooper reiterated the importance of up lifting the speaking of the Ga language if the Ga State was to achieve its vision of developing and promoting its culture.

Mr Kanyi stressed the need to develop an itinerary that would enable media houses to provide coverage of the king’s projects.