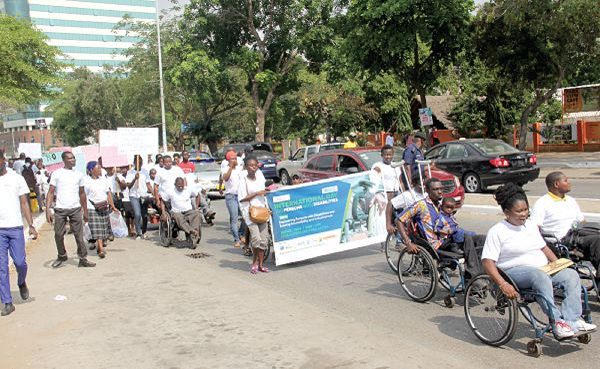 The leadership of Persons with Disabilities (PWDs) has appealed to the government to expedite processes to settle salary arrears of tollbooth workers with disabilities.

The group said the government owed tollbooth staff for October and November before collection of tolls was suddenly halted, leading to the laying off of all tollbooth workers, including the PWDs.

“It is unbearable if you are working and you do not receive your salary for two months, especially to us PWDs,” the PWDs said during a media engagement organised by the Centre for Employment of Persons with Disabilities in Accra yesterday.

“The sweat of our work should not dry before the government comes to pay us.

We have families that we are taking care of,” they lamented.

The media engagement was to draw attention to pertinent issues affecting PWDs.

The event, held in collaboration with the Ghana Disability Forum, Women Initiative for Self-Empowerment and the Elite Lions Club of Accra, was also intended to brief the media on activities lined up to commemorate the 2021 International Disability Day celebration scheduled to start from December 1 to 7.

The activities to commemorate the celebration include the distribution of wheelchairs, visitation to PWD victims of the Keta tidal waves, media launch of the Ghana Chamber for Entrepreneurs with Disabilities and a visit to an autism centre at Haatso in Accra.

The President of the Centre for Employment of Persons with Disabilities, Mr Alexander Tetteh, indicated that PWDs were not only disturbed by the unannounced termination of the tollbooth job, but also worried about the delay of the release of the Disability Common Fund — a social protection programme aimed at alleviating poverty among PWDs.

Mr Tetteh said the initiation of the common fund brought great relief to the PWDs, stressing that it catered for health, education, livelihood and other economic issues of beneficiaries.

“However, the common fund, for the whole of this year, has not been transferred to the district assemblies for onward distribution to the PWDs. We have starved persons with disabilities, and this is unacceptable,” he said.

Another challenge, he mentioned, was the high unemployment rate among PWDs, saying “getting a job had been a problem so the tollbooth job initiative was a relief.

“Now that the tollbooth job is taken away, we are handicapped.

But we hope the government intervenes quickly as it promised to reassign the PWDs to different jobs,” he said.

Mr Tetteh said his outfit, in collaboration with other disability organisations, was making initiatives to support entrepreneurs with disabilities.

“We are determined to improve the welfare of PWDs.

We do not want to sit down and be waiting on the government and the private sector for jobs,” he said.

A member of the PWDs, Ellah Ametor, proposed to institutions such as the National Council of PWDs, which managed and monitored the disbursement of the Disability Common Fund, to have a database to effectively monitor how the fund was disbursed.

According to him, there was no data to track the disbursement, and, therefore, “the same people keep receiving the common fund while some people never received it".