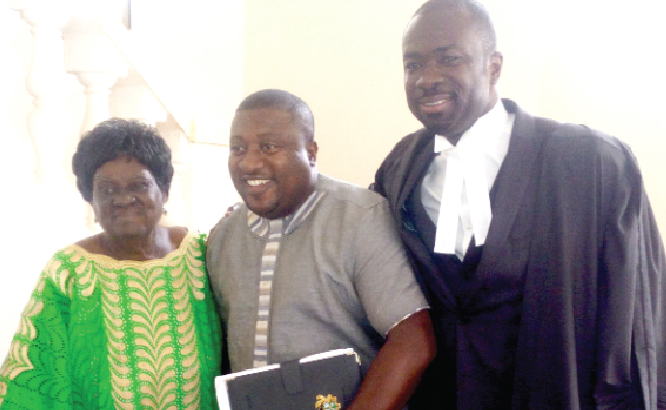 The Supreme Court has given the government a three-month ultimatum to seek parliamentary ratification of the agreement that facilitated the transfer of two former Guantanamo Bay detainees by the United States of America (USA) into the country.

The court further ordered that the two former detainees — Mahmud Umar Muhammad Bin Atef and Khalid Muhammed Salih Al-Dhuby — should be returned to the US government if the Ghana government failed to meet the ultimatum.

The Supreme Court gave the orders yesterday after it declared the transfer of the two former detainees into the country as unconstitutional.

In a 6-1 majority decision, it held that the agreement that facilitated the transfer of the two former detainees required parliamentary ratification and the failure of the then President John Mahama to get that ratification was a violation of Article 75 of the 1992 Constitution.

Mr Justice William Atuguba, however, dissented from the majority decision.

Article 75 of the 1992 Constitution gives the President the authority to “execute treaties, agreements or conventions in the name of Ghana, subject to ratification by an act of Parliament or a resolution of Parliament supported by the votes of more than one-half of all members of Parliament’’.

Bin Atef and Al-Dhuby were brought to Ghana in the first week of January 2016, following an agreement reached between the governments of Ghana and the USA.

But two individuals, Margaret Banful and Henry Nana Boakye, in June 2016, filed a legal action at the Supreme Court and prayed the court to declare the transfer and continuous stay of the two former detainees as unconstitutional.

In a suit which named the Attorney-General (A-G) and the Minister of the Interior as defendants, the applicants also sought an order directed at the Interior Minister to immediately return the two detainees to the US government.

According to the applicants, the President acted unconstitutionally in his failure to obtain the requisite ratification by an act of Parliament or a resolution of Parliament when he agreed with the government of the US to transfer the two former detainees to Ghana.

The A-G, in her defence, had argued that the document that allowed the two detainees to be transferred into the country was not a formal agreement and, therefore, did not fall under Article 75  of the Constitution.

According to state lawyers, the papers were administrative or diplomatic notes that established some form of agreement for the detainees to be brought to Ghana but not an agreement that ought to be brought before Parliament.

It is an agreement

But the Supreme Court, in its judgement yesterday, was of the view that there was an agreement between the governments of Ghana and the USA and as such that agreement fell under the category of Article 75 of the Constitution.

According to the court, per the agreement, Ghana had to fulfil certain obligations to the USA, such as the safe keeping and integration of the two former detainees into the country.

“There is no doubt that such an arrangement cannot be made without parliamentary ratification,’’ it said.

Also the court was of the view that Article 75 of the Constitution did not specify which agreement must be ratified by Parliament and as such all agreements made under that article required parliamentary ratification.

It also contended that based on the agreement, the two former detainees could not be classified as refugees or migrants per the United Nations (UN) definition, and as such their transfer into the country was not the sole prerogative of the Executive but required a ratification from Parliament.

Mr Justice Atuguba, in his dissenting opinion, stated that the two former detainees fell under the category of persons described as aliens and, therefore, their future ought to be determined by the Executive arm of government without any approval from Parliament.

Speaking to journalists after the judgement, the lawyer for the two plaintiffs, Nana Adjei Baffour Awuah, described the decision of the Supreme Court as victory for democracy.

“There must be a distinction between democracy and a military rule and that is exactly what this judgement has done,’’ he said.