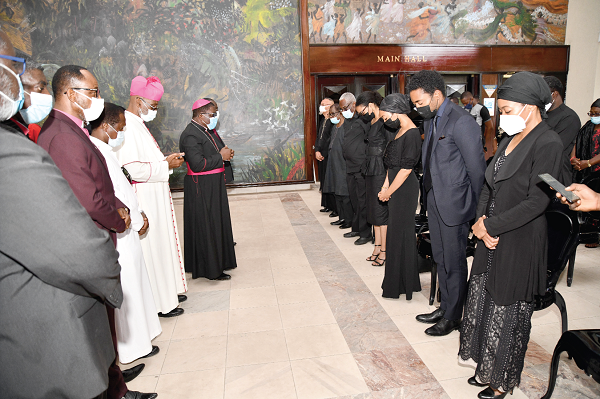 More dignitaries, including heads of the security agencies and religious bodies on Tuesday took turns to sign the Book of Condolence opened in memory of the late former President, Jerry John Rawlings, at the Accra International Conference Centre.

Those that signed for the religious bodies included the Presiding Bishop of the Perez Chapel International, His Eminence, Bishop Charles Agyinasare; the Catholic Metropolitan Archbishop of Cape Coast, Most Rev. Charles Palmer-Buckle, the Chairman of the Church of Pentecost, Apostle Eric Nyamekye, and the Presiding Bishop of the Methodist Church, Ghana, Rt Rev. Dr Paul Kwabena Boafo; the President of the Ghana Pentecostal and Charismatic Council, Rev. Paul Frimpong-Manso and the Spokesperson for the National Chief Imam, Sheikh Shaibu Aremeyaw.

Members of the Clergy led by Rt Rev. Boafo, Most Rev. Palmer-Buckle and Rev. Frimpong-Manso, prayed for the bereaved family, wishing the members God's protection and blessings.

During an interaction with the media, Most Rev. Palmer-Buckle underscored the need for the country to uphold the late former President's principle of probity, transparency and accountability.

For his part, Rt Rev. Boafo indicated that the late president had paid his dues to the country through his contributions to its growth and development.

Bishop Agyinasare noted that the late president's greatest legacy was when he had the opportunity to serve the people of the country.

Sheikh Aremeyaw said the legacy of Rawlings to the Muslim Community was in the granting of the Eid-ul-Ada and Eid-ul-Fitr holidays, as well as the establishment of the Islamic Educational Unit in 1987, which contributed to the education of Muslims.

Mr Osafo-Maafo told the media that the late President was genuine, forthright and cared for the underprivileged, adding that he had the zeal and courage for hard work.

For Brigadier-General Nunoo-Mensah, Rawlings stood for integrity, truth and compassion.