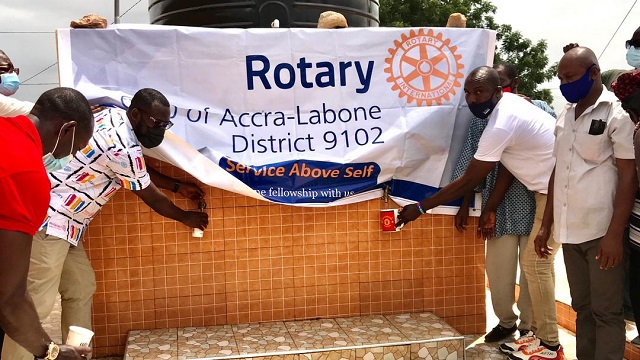 Rotary Club of Accra Labone has unveiled a mechanized borehole water facility residents of Alavanyo, a community in the Ga South Municipal District.

The club as part of its 20th-anniversary celebrations initiated the project to address the perennial water challenge in the community.

The Alavanyo community located in the Danchira electoral area which previously obtained water from an unsafe and stagnant puddle, will now draw water from the mechanized borehole system, a GHȼ24,000 project entrusted in the care of a committee set up by the leadership of the community to manage the facility and ensure its sustainability.

Speaking at the unveiling of the borehole facility, President of the Rotary Club of Accra Labone, Doreen Ashiboe-Mensah said the importance of safe drinking water and adequate sanitation cannot be overemphasized

Doreen Ashiboe-Mensah explained that the provision of the water facility would significantly improve the quality of life of the people of the community and consequently their socio-economic development.

She said the club has made a sustained commitment to the promotion of community health and that such causes would continue to play a vital role in fulfilling the club’s vision.

Mr Ahortor Ebenezer, Assembly Member of Danchira electoral area said that the project would bring significant relief to the community, explaining that the community had been dealing with many water-borne diseases and other strange ailments due to their poor source of drinking water and were fortunate to receive the club’s philanthropic gesture, adding that the borehole would alleviate their water challenges and influence their health positively.

While expressing gratitude to the club for coming to the aid of the community, he said residents would no longer have to walk long distances to purchase clean water.

Mr Ahotor said the facility would not only meet their long-term health benefits but would greatly impact the sanitation and hygiene of residents.

He also used the opportunity to call on donor and corporate organisations to assist the community to establish a school due to the long distances children have to travel to nearby villages to go to school. He said the Chief and elders have already allocated a piece of land for that purpose.

Philip Semevia, a leader in the community expressed appreciation to the club for the support and pledged their commitment to support the committee entrusted with the responsibility of managing the facility.

He said the lives of the local community would improve as a result of the access to potable water.

The club also donated some insecticide-treated mosquito nets to residents to prevent malaria.

They also educated residents of the community on the coronavirus disease and the critical need to adhere to the safety protocols.