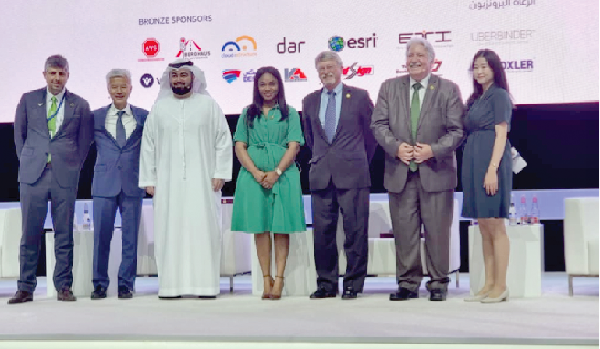 Ms Mavis Nkansah-Boadu (middle), Deputy Minister of Roads and Highways, with some officials at the exhibition in Dubai

The Deputy Minister of Roads and Highways, Ms Mavis Nkansah-Boadu, has said the ministry is working with relevant stakeholders in the transport sector to achieve the Decade of Action for Road Safety, which seeks to reduce road traffic accidents by at least 50 per cent by 2030.

During a panel discussion at the 18th International Road Federation (IRF) World Meeting and Exhibition in Dubai, she gave an account of what the government of Ghana had been able to achieve during the past Decade of Action from 2010 to 2020.

Ms Nkansah-Boadu, who was on the panel with renowned practitioners from Puerto Rico, South Korea, UAE and USA, indicated that although the average annual road fatalities over the past 10 years was 1,500 persons, the figure could have been worse if the government had not taken certain tough measures.

Some of the measures, which she alluded to, were the intensive road user education, the improved funding towards road construction, improved enforcement by the Police Service and a significant funding towards emergency response system when the government procured ambulances for all districts in the country.

“The Ministry of Roads and Highways will also ensure that roads constructed are inclusive, while placing emphasis on dualisation of major highways.”

“The government is putting modalities in place to regulate motorcycles and tricycles with the aim of ensuring their safe use,” Ms Nkansah-Boadu stated, adding that the sensitisation and education of all road users would also be intensified while road safety interventions would be data driven.

She called on all the actors within the road safety space, National Road Safety Authority (NRSA), Ministry of Transport, Ministry of Roads and Highways, the law enforcement bodies, the Building and Road Research Institutions (BRRI), academic institutions, research institutions, the public and private road transport unions, among others, to come on board toward the realisation of the vision.

“The next 10 years require strong leadership commitment to deal with road fatalities; it requires better engineering, increased financing, improved education and sensitisation, and above all ensuring enforcement through collaboration among institutions and regional bodies,” she added.