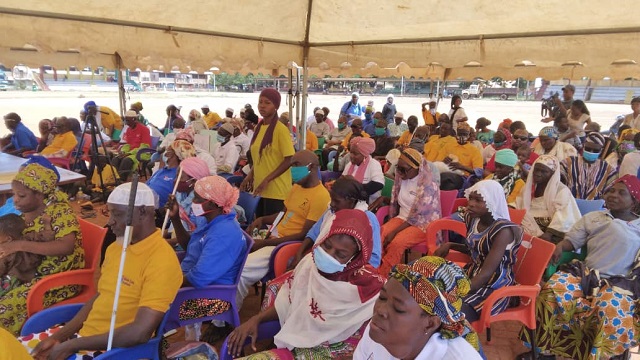 The president of the Northern regional chapter of the Ghana Blind Union (GBU), Mr. Bila Mohammed has urged motorists to respect the White Cane used by the visually impaired and support them while on the road to enhance their free movement and independence.

He said their condition was no fault of theirs and all that they required from the general public was for them to be accorded the necessary courtesies and support while on the road to also feel part of the society.

Mr. Mohammed made the remarks at a durbar held in Tamale on Saturday, October 16, 2021 to climax the commemoration of this year's World Sight Day (WSD) and White Cane Day (WCD) respectively.

The WSD and WCD are observed on October 14 and 15, respectively each year.

Members of the GBU in Tamale as part of activities to climax the celebrations embarked on a procession through some principal streets in the metropolis earlier in the day to draw attention to the White Cane as a symbol of mobility and independence and to recognise the transition of blind people from dependency to full participation in society.

The durbar held on the theme for this year's WSD, "Love Your Eyes", was also to motivate everyone to protect their own eye health, get regular eye examinations and encourage others to do the same to prevent sight loss, and to protect, preserve and prioritise vision.

It was organised by the Centre for Active Learning and Integrated Development (CALID), in collaboration with the Northern regional chapter of the GBU with support from Ghana Somubi Dwumadie, and funded by UK Aid.

Other speakers
The Executive Director of CALID, Mr. Mohammed Awal Sumani Bapio, for his part called on traditional and religious leaders to give care and support to the visually impaired within their jurisdictions.

That, he said was because, social and institutional maligning was one of the regrettable effects of vision loss.

He further called on the government and the society to support access to basic, equitable and quality healthcare and education for blind and partially sighted people in the Northern region. That, he said, will increase their employment and health care opportunities and called on the various Metropolitan, Municipal and District Assemblies (MMDAs) to place priority on early and appropriate disbursement of the Disability Fund to them.

The Northern Regional Director of the National Road Safety Authority (NRSA), Mr. Mohammed Abdul Samed said they will include the need for the White Cane to be respected in their education for motorists across the region to ensure safety and respect for blind people on the roads.

Challenges
The Northern regional secretary of the GBU, Mr Imoro Mohammed, said one of their biggest challenges currently was the non-availability of schools for visually impaired children in the Northern region as many of their students numbering over 100 have to travel outside the region to attend school in other parts of the country.

That, he said, had made some of the visually impaired students to drop out of school as parents could not bear the cost. He therefore called on the government to speed up the implementation of the Disability Act and also appealed to the government through the Ghana Education Service (GES) to select one basic school and one Senior High School (SHS) in the region, preferably in Tamale to integrate visually impaired students as a way of promoting inclusive learning.

He also called on the Ministry of Education and the GES to set out strategies and programmes that will tackle the numerous challenges of education that placed the visually impaired at a disadvantage, saying closely related to the problem was the absence of continuous education for technical and vocational schools to train their members, especially the youth to become self-employed and earn a decent living.