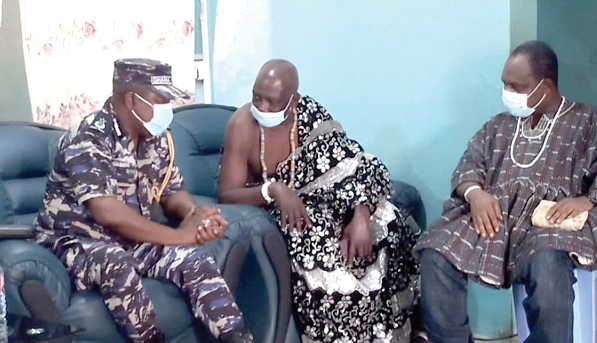 He said disputes over land had become a major source of conflict in the area, which the commander said was undermining the development of the region.

Barima Sasraku, who is the Chief of Jukwa-Mfuom and Adontenhene of the Abuakwa Nifa Division of Denkyira in the Central Region, said it was important for chiefs to use their time-tested traditional conflict resolution mechanisms to end all unresolved conflicts to pave way for continued development.

Barima Sasraku was speaking during a courtesy call on the Paramount Chief of the Kpone Traditional Area, Nii Tetteh Otu II, at his residence at Kpone last Wednesday.

He was accompanied by the Staff Officer,

Barima Sasraku explained that the visit was to officially inform the traditional council, the chiefs and the people about his assumption of office and express gratitude to them for the support given to the police over the years.

Barima Sasraku said since assuming office in August last year, one of the challenges he had identified was the issue of land disputes and said although some efforts had been made by previous commanders to resolve some age-old land disputes, the chiefs needed to delve into the time-tested traditional systems of resolving disputes to bring closure to the conflicts.

“Going through the records, I realised that there are a number of land issues within Gbetsile and Apollonia, which are both communities within the Kpone Traditional Area.

“As a chief, your authority is over people and land. As leaders, we are supposed to manage the challenges we face so that our people can live in a very peaceful atmosphere,” he added.

Barima Sasraku further urged the chiefs to also tackle the issue of land guards and its attendant threats and commended the Kpone paramountcy for the sustained peace in the area.

The commander also paid a courtesy call on the Municipal Chief Executive for Kpone Katamanso, Mr Solomon T. Appiah, to thank him and the assembly for their support in constructing a police station at Katamanso.

He said the facility would go a long way to boost security at Katamanso and neighbouring communities.

Mr Appiah said the assembly would continue to collaborate with the police in their security and peacekeeping duties.

Nii Otu expressed appreciation to the Tema Police Command for the visit.

The Chief of Gbetsile, Nii Teye Kojo Amankwa Sune I, said it was the first time in 32 years that a police commander in the Tema Region had visited the palace and said the gesture bode well for cooperation between the two institutions.

He said issues of land disputes were a major challenge and appealed to the government to demarcate the traditional boundaries between Kpone and its neighbouring communities, such as Prampram, to promote peaceful coexistence.