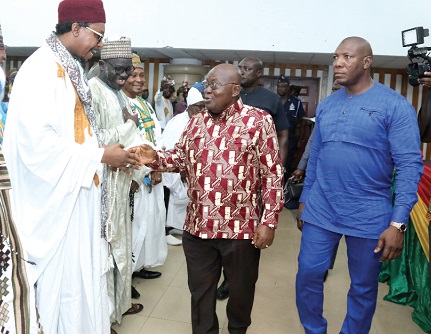 President Akufo-Addo exchanging pleasantries with some of the leaders of the Tijaniya Muslim Council
30.5k Shares

President Nana Addo Dankwa Akufo-Addo has urged Muslims to rescue Islam from extremists whose activities around the world seem to be redefining the religion of peace.

The event was on theme: “Religious tolerance: Panacea for peaceful coexistence”.

President Akufo-Addo said he was aware that the ideologies that extremist Muslims preached were not based on Islamic teachings and said it was incumbent on all adherents of the peaceful religion to rescue it from the extremists whose activities around the world seemed to be defining Islam.

Islam, he added, was at the crossroads and it was a sad commentary on the religion of peace that it was currently credited with being responsible for the acts of radicalism, extremism, violence and destabilisation taking place around the world by groups such as ISIL, Al-Qaeda and Boko Haram.

The President referred to an adage which translated thus: “It is the silence of the righteous that has allowed evil to triumph” and urged all peace-loving Muslims to speak up, let their youth shun violence and seek the path of knowledge, for it was the part of illumination.

He said Muslim youth could not continue to be used for violent purposes, adding: “I want to make this appeal to you: in 2020, do not allow yourselves to be used by irresponsible politicians to engage in acts of destabilisation and violence.”

He said a considerable part of the peace Ghana was enjoying was due to the long-standing peaceful relationship and coexistence between Christians and Muslims in the country and called for more efforts to sustain it.

President Akufo-Addo said that peaceful coexistence was one of the most positive and acclaimed hallmarks of Ghana and commended members of the Tijaniya faith for the great contribution to that peaceful development.

He said policies such as the free senior high school and the Zongo Development Fund were meant to create the opportunity for every Ghanaian child to realise his or her potential and for Zongo communities which, for decades, had become exclusion zones to be brought to the mainstream of the development agenda.

He stated, however, that all the efforts at development would come to nought if Muslims did not live in harmony with people of other faiths.

President Akufo-Addo assured the Leader of the Tijaniya Muslim faith, Sheikh Khalifa Abul Faidi A. Ahmed Maikano, of the government’s support for the school project the group had embarked on.

A leading member of the NPP, Sheikh I. C. Quaye, also urged Muslims to seek peace during the coming year through self-sacrifice, adding that they had gathered to seek peace with their Christian brothers and sisters and traditional leaders.