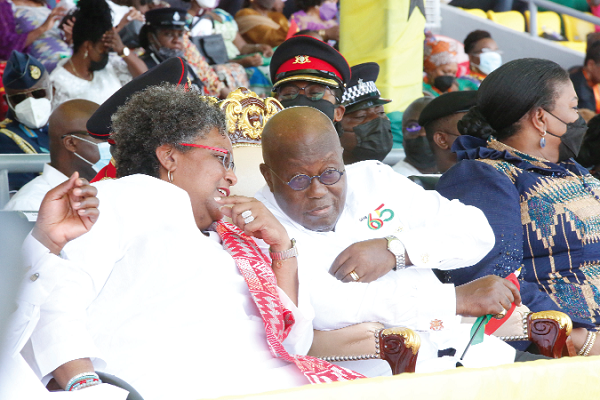 The Prime Minister of Barbados, Mia Amor Mottley, has encouraged the youth to reject the impression that there are first- class and second-class citizens being created by the inequalities and inequities in the world.

Ms Mottley stressed that despite the inequalities and inequities that posed a challenge to developing countries, there was no first-class or second-class citizens and thus called on Ghanaian youth not to allow that to affect them.

She stressed that it was up to Ghanaians to stand tall and proud despite the challenges and assert their rightful place in the global community as the country marked 65 years of Independence from British colonial rule.

Speaking as the Guest of Honour at the 65th anniversary celebration of Ghana’s independence at the Cape Coast Stadium yesterday, Ms Mottley emphasised:

“And yes my friends, and yes the young people of Ghana, in particular, I’m mindful that for you this may seem a journey that is long, long past from where it started 65 years ago.

“But be assured that that anchor 65 years ago is what allows us now to stand tall and proud, even as we see the ugly face rearing itself again like racism and imperialism across our world.

Ms Mottley said every citizen of the world deserved the right to be heard, the right to be seen and the right to be cared for, and also called for a concerted effort from Africans in the fight against imperialism and racism, which was on the rise, and harming Africans through enhanced economic management.

Working together in solidarity, she emphasised, was needed to fight the battles of the current generation.

“It is for that reason that we have to work together in solidarity to fight the battles of our time even in the face of racism and imperialism,” she stressed.

She noted that the issue of racism and imperialism could be changed if African leaders got together to modernise enterprises, establish economies of scale and strengthened their local economies, which would make them self-reliant.

The Special Guest said it was vital for African leaders to take quick and practical efforts to eradicate racism before it became a generational issue that would continuously threaten the continent's human and natural resources.

To ensure this, Ms Mottley urged policy makers to adopt bold, game-changing moves to recognise the continent's immense potential to boost trade and expand the continent's share of global trade.

"Africans are resilient and dominant people capable of moving strong ahead in whatever decision they take,” she stressed, calling on countries across the Atlantic to build strong bonds in order to explore market opportunities and obtain economic benefits.

"Those of us across the Atlantic cannot be divided, not even by the forces of history or the passage of time and I strongly believe we must build great markets to our benefit," she emphasised.

The Barbados Prime Minister also argued that the G20, a multilateral forum made up of 19 countries and the European Union, should be expanded to include the African Union to enable African policy makers to have a stronger voice on global issues such as economic challenges, international financial stability, climate change mitigation and sustainable development.

She observed that it was unfair that the African continent with its wealth of human and natural resources lacked adequate representation on the international stage.

"When we look at the global architecture and the realm of fairness in the structure of it, we need re-echo our call that the African Union should be given a chance to become part of the global leadership if it is to be legitimate and morally accepted by us all.

“The G-20 cannot remain G-20, it must become the G-21, for we know that the African Union constitutes the fifth largest economy in the world and we know that the 1.3 billion people of this continent actually have the greatest demographic dividend to be rich in the 21st century with the largest percentage of young people.

"If there is to be a future for these young people, then that future must be shaped by not only those who tell us what to do, but by those who experience what it is to provide for that 1.3 billion people on this continent."

Ms Mottley called for greater cooperation and solidarity between African and Caribbean leaders to enable both parties to have greater economic trade and investment opportunities.

She added that while a permanent forum for African and Caribbean territories and states had been established and coordinated by the African Union and the CARICOM Secretariat, the success of the forum and realisation of a strong economic bond was primarily dependent on the commitment of both parties.

The Prime Minister added that her country was determined to stand united on matters concerning the development and enhancement of the lives of Ghanaian youth.