Regular and Irregular Migration: A comparative investigation of opportunities and perils of seeking greener pastures in Italy

They took different paths to their desired destinations, Italy or somewhere close – one through regular migration, (acquiring a visa and traveling by air) and the other through irregular migration, (taking the perilous journey by road from Ghana through Niger, to the Sahara Desert and Mediterranean Sea ostensibly enroute to Italy). But Ms. Adjoa Agyeiwaa, the regular migrant and Mr. Stephen Adjei, the irregular migrant, had one goal in common: to travel to Italy to seek greener pastures for themselves and secure a better life for their families back home in Ghana.

In the end, though, only one person made it ---the person who procured a visa at the Italian Embassy, near the Switchback Road, in Cantonments, in Ghana. Ms. Agyeiwaa (real name being protected good reasons) procured a visa, a Type “C” visa ostensibly to travel to Rome, Italy, as a tourist to visit the Vatican and other places of interest, but her real intention was to stay on and look for work. While in Rome, with the help of Ghanaian and Nigerian friends, she did some odd jobs and was paid under the table, she told Graphic Online in an interview while on vacation in Ghana in her home in Kibi, a town in the Eastern region of Ghana.

She recounted her journey 10 years to this month, March, 2017, highlighting how desperate she was after being unemployed three years after completing her Bachelor of Arts degree at the University of Ghana, Legon.

After searching unsuccessfully for jobs on the Ghanaian market for three years and with no real capital to start her own business, traveling outside the shores of Ghana became the only option for her. Her preferred destinations in order of preference were the United States of America, United Kingdom, Australia, and Canada.

“Italy was not on my preferred list of countries because I wanted to go to a country that had English as their first language”, she said, adding that she settled on Italy after her applications for a visa to the US, UK, and Australia respectively were denied.

“One of the attractions for me in finally taking the Italy travel opportunity was that I am a Catholic, so my Catholicism kicked in and I became excited about the opportunity to visit the Vatican, which  I have visited countless times since I have been in Rome”, she explained.

Ms. Agyeiwaa went on to marry an Italian and secured her “carta di soggiorno” or permanent residence card and has three children with her husband. 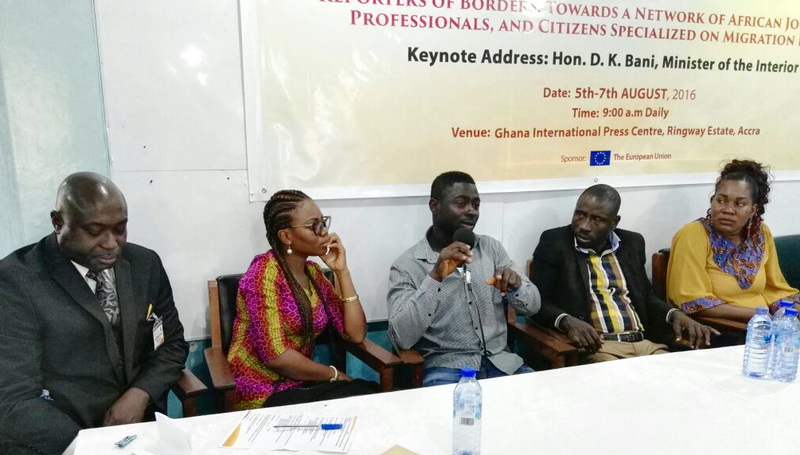 Stephen's horrid experiences, and his shocking desire to return to Libya, tells on the attention of his audience

By contrast, Mr. Adjei, the irregular migrant had a different experience, an experience which nearly cost him his life. Recounting his experience to investigative journalists at a workshop on migration issues organized by Panos Institute West Africa (PIWA) and the Africa Center for International Law and Accountability (ACILA) in Accra, Ghana, in August last year, 2016, he said he traveled by road from Ghana through the Sahara Desert enroute to Italy.

He traveled from the Brong Ahafo region in Ghana through to the Volta Region to Togo, Niger, Sahara Desert, and Libya by road en-route to Italy and  recounted the hazardous journey which took him, and others, more than a month from Niamey to get to Libya with some dying on the way.

Mr. Adjei said that the trip from Ghana to Libya, where he was waiting to go on a boat on the Mediterranean Sea, cost him about $1,200, noting that he stayed and worked in Libya for four years often vacillating between going to Italy or staying in Libya to work.

While working in Libya, he heard countless stories about travelers who attempted to go to Italy via the Mediterranean Sea and how many of them ended up as lifeless cargo on the high seas.

He also noted that the boats that the migrants travel on depart from irregular routes in Libya at dawn, typically setting off at 2a.m, overloaded, and reaching their destinations at about 4pm the next day, for the boats that make it.

He explained that instead of focusing on going to Italy, he would rather stay in Libya and work, citing the economic opportunities in Libya in contrast to limited opportunities in Ghana, and particularly his younger sister who depends nearly entirely on his support, as the primary motivations for his decision to go back to Libya.

The perils facing migrants who use irregular routes (by road through Niamey, Sahara Desert, Libya, Mediterranean Sea ) to travel to Italy or attempt to travel to Italy, are well recounted by other survivors, with the death toll increasing exponentially over the years, according to data from the Mission Migrants Project and the Global Migration Data Analyses Centre.

Italy and other members of the European Union have been observing the rising trend of irregular migration with alarm and have been taking a number of steps to address the issue. However, a revealing fact is that unless economic conditions in African countries improve, irregular migration may yet become the norm for so many thousands more.

This article was brought to you by Graphic, Africa Centre for International Law and Accountability (ACILA) and Panos Institute West Africa, with support from the European Union.