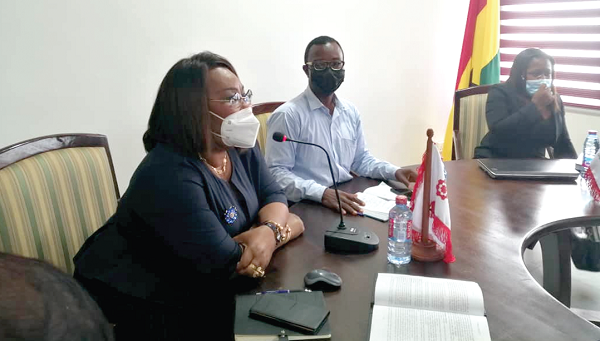 Mrs Jemima Oware (left), the Registrar-General, addressing the seminar. With her is Mr John Defuor, Director of Policy and Research, Association of Ghana Industries

The Registrar-General’s Department (RGD) will, from the end of this month, start a process to permanently remove some 50,000 firms from its database.

Those firms had been registered since 2011 but failed to file their annual returns, in compliance with the Companies Act 2019 (Act 992).

The initial step is to freeze the inactive firms for 12 years, after which their records will be deleted from the system as part of efforts to make the register more credible.

The Registrar-General, Mrs Jemima Oware, who made this known at a sensitisation seminar by the Association of Ghana Industries (AGI) in Accra last Monday, further explained that the exercise had become necessary because the department’s database was bloated with names of dormant and non-compliant firms.

The seminar, held in collaboration with the Registrar-General’s Department, was to update members of the AGI on the new Companies Act (Act 992).

She said the department had, in April 2021, issued the third and final public warning to the affected companies.

Mrs Oware said the companies included those limited by shares and guarantee, including external firms.

Mrs Oware said companies whose names would be expunged or put in the state of inactiveness would have to go to court to have their businesses restored.

“We started the exercise with a sample of about 50,000 companies on the register which failed to file their annual returns in compliance with the law. We gave them three-month notices and now we have gone past seven months, yet they have still not updated us with their records. So, in compliance with the law, we are striking out their names from the register by first putting them in a state of inactiveness.

“In that state, only a court can direct that the names of those companies be restored to the register,” she said.

Mrs Oware, however, said the court process could be avoided if dormant businesses paid the required GH¢50, in addition to a yearly penalty of GH¢450, after which they would file their returns as expected of them.

“When you file an annual return, you are updating the Registrar -General on changes that have taken place in your company, whether you have carried out any business or not. It is just GH¢50.

“We want you to update us on whether directors are the same or not, shareholders are still the same or the office of the company has been moved. That is all that we are demanding, not whether the firm has carried out business or not,” she added.

Interacting with the media after the meeting, the Chief Executive Officer (CEO) of the AGI, Mr Seth Twum-Akwaboah, said the sensitisation programme was necessary to help members improve on corporate governance practices, as well as align with new provisions of the act to ensure compliance.

"Our local businesses will be better placed to integrate into the global economy if corporate governance standards are upheld," he said.

Mr Twum-Akwaboah advised members whose companies were incorporated before 2012 but which had still not complied with the re-registration directive to quickly do so before the deadline elapsed.

He said it was gratifying that the RGD had taken steps to enhance online business registration and urged members to explore the registration portal on the Registrar-General’s website.