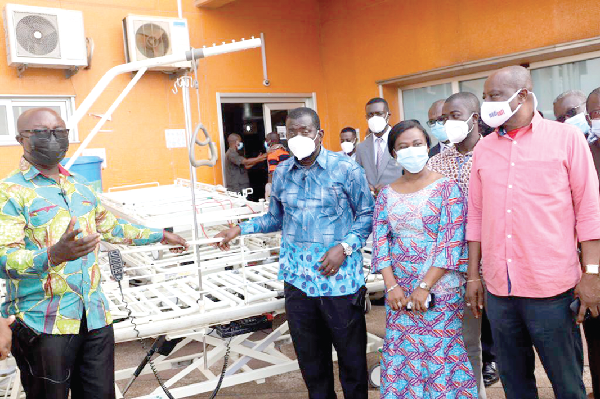 • Mr Osei Assibey Antwi (left), the MCE for Kumasi, presenting the beds to Dr Oheneba Owusu-Danso, the CEO of KATH, in Kumasi. Looking on are Mr Akwannuasah Gyimah (right), the MCE for Asokwa, and Mrs Gloria Timmah Gambrah, the MCE for Oforikrom.
30.5k Shares

The three hospitals received 20 beds each to support the treatment of COVID-19 cases at the isolation centres of their facilities.

There have been similar donations to the Korle Bu Teaching Hospital, the 37 Military Hospital and the Greater Accra Regional Hospital (formerly Ridge Hospital) in Accra.

The donations form part of efforts by the foundation to support the fight against the COVID-19 pandemic.

The Chief Executive Officer of the Kumasi Metropolitan Assembly, Mr Osei Assibey Antwi, made the presentation on behalf of the First Lady, Mrs Rebecca Akufo-Addo, who is the CEO of the foundation.

He was assisted by the Press Secretary to the First Lady, Mr Richard Darko.

The First Lady said the foundation would continue to support the cause of the vulnerable in society to put smiles on their faces.

She mentioned the establishment of the Mother and Baby Care Unit at the KATH and the provision of medical items for health facilities across the country as some of the interventions by the foundation in the health sector.

Mrs Akufo-Addo said similar donations of beds would be made to the Suntreso Hospital, also in Kumasi, in due course.

The CEO of KATH, Dr Oheneba Owusu-Danso, who received the items on behalf of the beneficiary institutions, expressed appreciation to the foundation for its assistance to the health sector in the region over the years.

For his part, the MCE for Asokwa, Mr Akwannuasah Gyimah, said: "People such as Mrs Akufo-Addo are hard to find these days; it is, therefore, important that we cherish her benevolence."

He called for more collaboration between MMDAs in the region and the Office of the First Lady for enhanced support for accelerated development.

Since its inception in 2017, the foundation has spearheaded the construction of a new Mother and Baby Unit at KATH, assisted schools and supported children from across the country to undergo urgent medical interventions and also resourced many orphanages in the country.

It also funded the construction of a bridge at Zenu, a low-income and highly populated community in the Greater Accra Region, and renovated a community clinic at Abamkrom in the Central Region.

In addition, the foundation has trained about 200 women in the Eastern and the Northern regions in entrepreneurship, including beads and batik making.