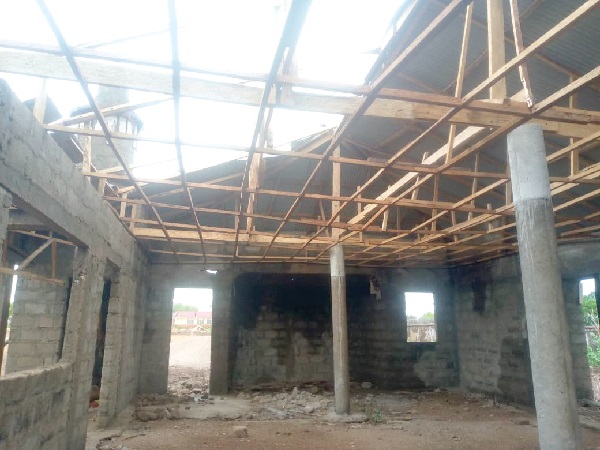 A severe rainstorm that hit Bolgatanga and other areas in the Upper East Region last Wednesday evening (April 27) destroyed some educational facilities and properties in two senior high schools (SHSs).

The storm, which started around 8 p.m, destroyed and ripped off the roofs of several facilities such as the school’s science laboratory, home economics centre, two dormitories, and the Regional French Centre.

Also, the offices of the Bolgatanga Municipal Directorate of the Ghana Education Service (GES) were not spared either as portions of the roofs of the building were affected, destroying documents and other educational materials.

Other facilities heavily affected at the BOGISS were the mosque, conference hall, teachers’ quarters, dining hall, and a place of convenience constructed for the school by WaterAid Ghana, a non-governmental organisation (NGO).

At the Kongo Senior High School in the Nabdam District, the roof of the library block was destroyed resulting in the destruction of thousands of library books as well as admission letters of students.

Officials of the Northern Electricity Distribution Company and the Volta River Authority have visited the school to assess the extent of damage and had given an assurance that emergency steps were being taken to restore power to the school.

As a result of the rainstorm, academic work was curtailed yesterday as staff members, both teaching and non-teaching, together with the students, tidied up the environment of both schools for academic work to resume.

According to the Headmistress of BOGISS, Patricia Agoteba Anaba, the destruction of the school’s facilities was a great source of worry to them since it would have dire consequences on academic activities.

“There is the urgent need for the critical educational facilities to be fixed to pave the way for academic activities to continue,” she said, stressing: “Failure on the part of authorities to fix the situation in an emergency manner will compel us to run a shift system of learning.”

The Headmistress of Kongo SHS, Gifty Ayamba, appealed for roofing sheets, nails and quantities of wood to re-roof parts of the affected buildings in the school that were badly damaged.

The Upper East Regional Director of the GES, Edward Azure, said after going round to monitor the outcome of the disaster that hit the school, it was observed that damages to the schools were very severe.