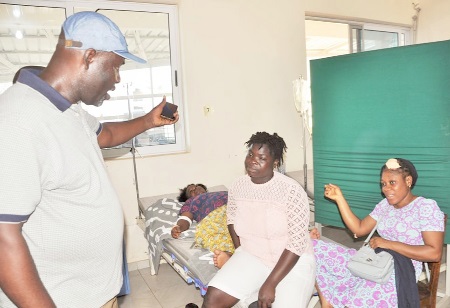 Divine Richard Bosson, the Ho Municipal Chief Executive, visited some women who were injured during the storm, at the hospital Follow @Graphicgh

The Volta Regional capital, Ho, was last Wednesday hit by a rainstorm which flooded at least 50 homes and caused extensive damage to some 20 school buildings, many shops and other structures.

Scores of electricity poles and giant billboards, as well as shops made of shipping containers and electricity poles were also not spared by the late afternoon rainstorm which started a little after 4 p.m. and lasted for about an hour.

At the Ho SSNIT Flats Presbyterian Basic School for instance, the roofs of three classrooms, P1, P2 and P3, were completely ripped off by the storm.

As a result, about 120 pupils had to attend classes the following day under trees on the school compound, according to the Headmistress, Madam Vivian Coffie.

She told the Ho Municipal Chief Executive (MCE), Mr Divine Richard Bosson, who was there to assess the damage that the school had a total enrolment of 320, adding that the school was struggling to hold lessons for the displaced pupils without any disruption.

Madam Coffie appealed to the assembly to come to the aid of the school as soon as possible.

Similarly, the roofs of three classrooms at the Ho E.P. Kpoanyigba Primary School were carried away by the storm.

The story was no different at the R.C. Girls’ Basic School, where the roof of one classroom block was ripped off by the storm.

At 10 a.m. the next day, scores of giant billboards and electricity poles were found lying by the roadside.

Three people were injured at a restaurant opposite the Ho Municipal Hospital when a mango tree fell on the wooden spot during the rainstorm.

The MCE visited the injured women at the emergency ward of the hospital to assure them of the assembly’s support in their time of distress.

At the time of filing this report, Mr Bosson said the assembly had instantly procured the needed building materials and directed the works department of the assembly to start repairing the damage caused to the school buildings.

“We cannot wait any further because we do not want the academic calendar of the schools to be disrupted,” he said.

He expressed misgivings about the conduct of some corporate bodies which erected billboards in the municipality without any permit from the assembly, warning that those behind such acts would be dealt with swiftly according to the law.