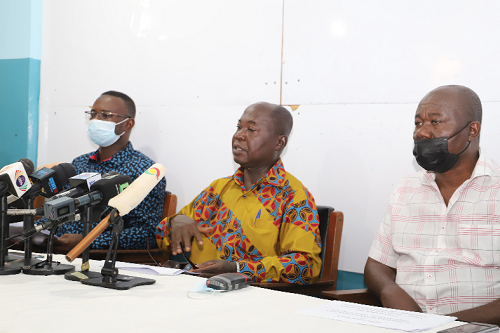 Members of the Commercial Quarries Operators Association of the Ashanti Region are up in arms against persons who are developing buffer zones around quarrying sites into residential settlements.

An advisor and spokesperson of the association, Mr John Adjei Duodu, said the “encroachment” activities had compelled some quarries to shut down.

At a news conference in Accra yesterday, Mr Duodu called for institutional collaboration between relevant government agencies and the association to find a lasting solution to the situation.

Mr Duodu said aside from the threat to the industry, occupants of residential facilities around quarries risked respiratory problems from the dust and substances that filled the air after a blast or explosion during quarrying.

“An effective collaboration and coordination of the agencies and strong government action will produce the desired results to curtail the encroachment on these scarce resources and to further boost public interest in granite quarries for the development of our country,” he said.

He said there were high incidents of encroachment even on sites licensed for stone quarrying operations although the operators on the sites had land title deeds from the Lands Commission to operate.

He said the buffer zones around quarrying sites were normally estimated to be around 400 metres within which human settlement was prohibited due to the dangerous and high-risk activities on quarrying sites.

Mr Duodu explained that the activities of the encroachers did not only affect work at the quarries but also threatened the future of the quarrying business and its contribution to the construction industry.

He said, for instance, the production of granite was under threat due to the activities of the encroachers, stressing that it had resulted in the scarcity of the material as an important component for some construction works.

“Granite is useful a material used in the construction of roads, tunnels, hydro dams, harbours and reservoir dams. So, we can see that this granite which we are treating anyway is a very valuable material,” he said.

Quarrying operations in the country include the production of granite, limestone and sandstone mainly for construction works.

Generally, industrial mining activities are significantly reserved for Ghanaian citizens, while exceptions are made for foreign investors with a minimum investment of $10 million.