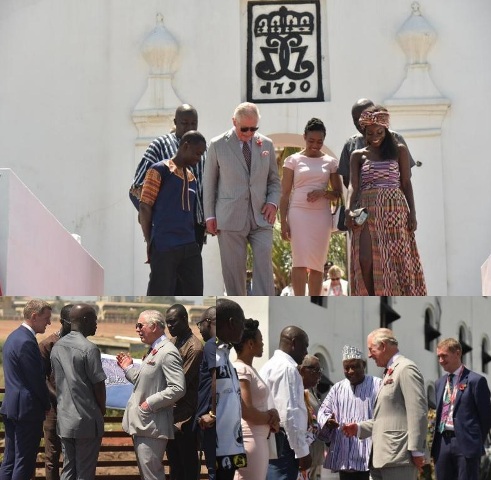 Prince of Wales was accompanied by Zanetor Agyemang-Rawlings, the Member of Parliament for Korle Klottey.

Built in the 17th Century, the Christiansborg Castle originally operated as a Danish slave trade fort.

The British took over the Christianborg Castle from the Danes in 1850.

Although it is very difficult to determine, it is estimated that over 1.5 million African people were traded through the Christiansborg Castle and that, overall, six million human beings were traded from West Africa.

Below the Christianborg Castle at sea-level are dungeons, now filled in, where enslaved Africans were kept for as long as six months whilst awaiting shipment overseas.

With Ghana’s independence from Britain in 1957, the Christiansborg Castle was renamed Government House and became the seat of Government.

To mark 400 years since the arrival of the first enslaved Africans in the United States, Ghana has declared 2019 as a ‘Year of Return’, inviting Africans in the diaspora to journey to the country.

The Ghana Tourism Authority is developing a year-long calendar of activities to celebrate the resilience of the African spirit, including some at Christiansborg Castle, Osu.

The Prince of Wales also toured the Marine Drive Project, where he was conducted around by Sir David Adjaye, the Project architecture.

The Marine Drive Project, when completed would go a long way to boost Ghana's tourism potential.