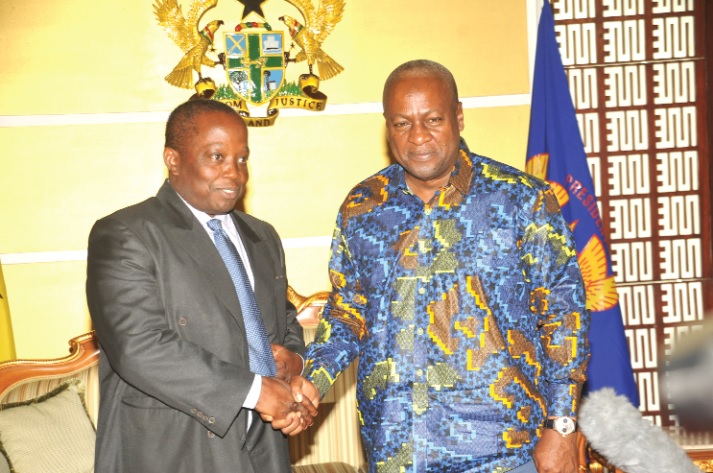 President John Dramani Mahama has spoken highly about the new Auditor-General and assured him that the government will co-operate with him to discharge his duties effectively.

Mr Daniel Yao Domelevo, 55, who, until his appointment, worked as a Senior Financial Management Specialist at the World Bank, was sworn in by the President at the Flagstaff House last Friday.

The President revealed at the brief swearing-in ceremony that it took an exacting search to "discover" the highly professional Mr Domelevo.

"I know you worked with the Accountant-General's Department for so many years and you are very highly qualified, but it took quite a search to eventually discover you," President Mahama said.

He mentioned the important role the Audit Service played in good governance and how professionals in the service must strive to deliver results.

“The Audit Service exists to ensure good governance and, therefore, your responsibility, together with your team, is to deliver this to Ghanaians through the pursuit and application of the highest level of professionalism, accountability, probity and transparency in the public financial management systems of Ghana," he said.

The President said the National Anti-Corruption Action Plan which the government had been working on had three key principles, namely, prevention, education and prosecution.

He emphasised the need for the Auditor-General to put emphasis on the prevention of corruption.

“Prevention and education are put first because we believe that the best practice is to prevent it from taking place, and so in discharging your job, your emphasis is not on sanctioning but creating the system that prevents misappropriation of public funds from taking place in the first place," he told the new Audit Service boss.

President Mahama added that when corruption occurred, offenders must be sanctioned.

“Of course, when it happens, it is important for us to sanction whoever had undertaken that and so I hope that you will work with the government to ensure that we are able to bring probity and accountability into our public services, especially, and ensure that we minimise the misuse of government funds and property," he said.

Mr Domelevo thanked the President for the appointment and pledged not to disappoint the nation.

Speaking to journalists later, he dismissed reports that he had rejected the offer from the President to head Ghana's Audit Service.

An Accra-based legal practitioner, Mr Egbert Faibille Jnr, had stated categorically on Joy FM’s Newsfile programme on Saturday, December 24, 2016 that Mr Domelevo had swerved the planned swearing in slated for December 23, 2016 after realising the controversy surrounding the appointment.

But Mr Domelovo rejected the claim, explaining thus:  "When the appointment was given me, I thought I had to go back to my previous employers. I was with the World Bank. It was not good for them to see in the news that I have been appointed, so I sought permission to go back before I come in and accept the offer."

The new Auditor General also saw nothing wrong with the timing of his appointment.

"I don't think there will be any problems. One of the things about the Auditor-General is his independence. And so if one administration should appoint you for you to work with another administration, it guarantees your independence better,” he said.