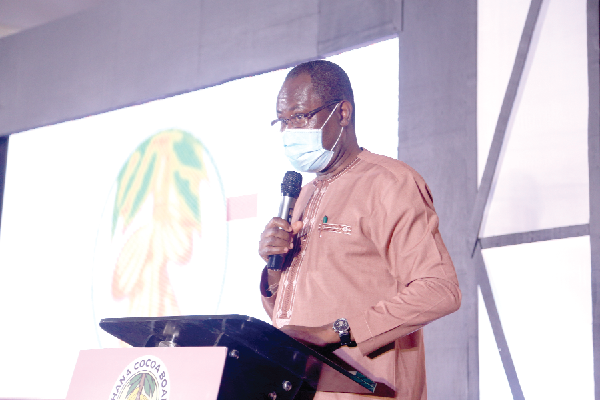 The President is expected to release a pre-recorded video in which he is featured sharing his involvement with chocolate and other cocoa products and his appeal to the public to consume cocoa products for health and vitality.

The Public Affairs Manager of Ghana Cocoa Board (COCOBOD), Mr Fiifi Boafo, said President Akufo-Addo’s message is part of special campaign messages from the country’s top leaders encouraging the public to consume more cocoa-sourced products.
He told the Daily Graphic yesterday that the campaign was part of the Chocolate Week celebration that was launched last Thursday, February 4.
He said the week was dubbed : 'Eat Chocolate, Stay Healthy and Grow Ghana', and will feature key personalities sharing their experiences with chocolate, which is sourced from cocoa.

Other leaders
Mr Boafo said other key leaders, including the Vice President, Dr Mahamudu Bawumia, and his wife, Mrs Samira Bawumia, would also share their chocolate stories with Ghanaians.
He mentioned some of the key personalities as the Chief Justice, Justice Kwasi Anin Yeboah; the Speaker of Parliament, Alban Bagbin, and the Chief of Staff, Mrs Frema Osei-Opare.

The event is an expanded version of the National Chocolate Day introduced in 2007 and has been marked every year on Valentine's Day, February 14, to promote cocoa consumption in the country.

It is the initiative of the Ghana Cocoa Board (COCOBOD), the Ghana Tourism Authority (GTA), and the Ghana Investment Promotion Centre (GIPC) to whip up interest in domestic processing and consumption of cocoa.

It is also aimed at ensuring that the country processes a large chunk of cocoa it produces and which is revered globally as a premium bean.

Domestically, it is also targeted at improving the revenues derived from the crop, create jobs for the country’s teeming youth and industrialise the economy.

Launch
The Chief Executive Officer of COCOBOD, Mr Joseph Boahen Aidoo, said at the launch in Accra that over the past four years, the board had pursued several programmes to promote local processing of cocoa.

He said one of such programmes was the National Chocolate Week which would be marked in February every year by COCOBOD, in collaboration with the GTA and chocolate manufacturers, to not only display or sell various cocoa savouries, recipes and confectioneries but also for players in the industry to interact as well as raise public awareness of the health benefits of cocoa consumption.

Value addition
He said COCOBOD was committed to adding value to cocoa produced locally and to actively promote the consumption of its derivatives.

“This has been informed by the fact that cocoa is a superfood embedded with countless nutritional and health benefits which must be consumed daily. As I have always said, consuming cocoa products is very useful for children, youth, adults and the aged as well," he said.

He said cocoa was also found to boost the general well-being of the body and was, therefore, the preferred beverage that was consumed daily.

Per capita consumption
He said in spite of the enormous benefits of cocoa, its consumption in the country was low.

The Chief Executive Officer of COCOBOD said the amount of cocoa processed domestically was low in spite of the fact that the country had a domestic processing capacity of more than 500,000 metric tonnes (MT).

He said this scenario "obviously required a renewed commitment towards increasing the amount of cocoa processed locally each year and to reduce the annual export volume of cocoa."