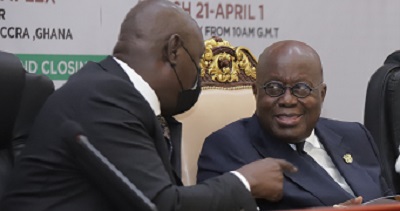 President Nana Addo Dankwa Akufo-Addo has asked the ECOWAS Community Court of Justice (CCJ) to change its procedures to ensure that parties that seek redress at that forum exhaust all local remedies prior to invoking the jurisdiction of the court.

That, he explained, would prevent potential conflicts between member states and the court, allow for the systematic development of its authority and also enable member states to enforce its judgments.

President Akufo-Addo made the call in Accra yesterday when he opened the ECOWAS Community Court of Justice sittings taking place within the Law Court Complex.

It is the first time the court is sitting in Ghana. The five-member court will sit and adjudicate on matters for two weeks.

The external court session will be held at the Law Court Complex, Accra, with the five Justices of the CCJ hearing 60 cases, one pertaining to Ghana and 25 due for judgments.

It is in compliance with Article 26 (2) of the ECOWAS Protocol establishing the CCJ, which permits the court to hear cases in any territory of ECOWAS member states “where circumstances or facts of the case so demand”.

President Akufo-Addo cited the example of other international courts, such as the African Court on Human and People's Rights, where applicants must demonstrate that all local remedies had been exhausted or obviously unduly prolonged before the application would be admitted.

“Again, the admissibility criterion for an application to the European Court of Human Rights requires that all domestic remedies should have been exhausted in accordance with generally recognised rules of international law before the court will deal with the matter,” he added.

The President explained that the treaty establishing the ECOWAS CCJ had clothed it with jurisdiction over allegations of human rights abuses in member states, and that such expanded jurisdiction did not require parties to exhaust all local remedies prior to invoking the jurisdiction of the court.

President Akufo-Addo added that in some cases, member states found it difficult to enforce such judgment because they were inconsistent with the concerned member municipal laws, although some judgments had even led to efforts to attach state assets to enforce the judgments.

The President suggested that to obviate any potential conflict between the court and national governments and allow for the systematic development of the court’s authority, the judges must resort to judge-made practice directions, as pertained in common law judicial jurisdictions.

“National sovereignties should not be an impediment to the realisation of our community objectives. All that is needed is the necessary political will,” President Akufo-Addo added.

He noted that despite the best efforts by the ECOWAS CCJ to deliver on its mandate, it was constrained by the poor rate of enforcement of its judgments, which presently stood at some 13 per cent.

He cautioned that unless member states complied with the judgments of the court, it would be difficult to build public confidence in it.

President Akufo-Addo appealed to ECOWAS states to comply with the treaty’s obligations by observing and obeying the judgement of the court.

He urged all member states that were yet to appoint the competent authority for the enforcement of the judgments of the court to do so without further delay.

The Chief Justice, Justice Kwasi Anin Yeboah, said the external court session of the CCJ would expose the operations of the court to the public and also deepen cooperation between the court and Ghana’s judicial system.

He called on ECOWAS to review the decision to reduce the number of justices on the CCJ from seven to five.

The President of the CCJ, Justice Edward Amoako Asante, said the rationale for the external court sessions was to make the court more accessible to citizens of ECOWAS member states who did not have the means to travel to Abuja, the permanent base of the court, to access the court.

“The external court session is also a very useful tool to create awareness of the court, its mandates, jurisdiction, practice and procedure,” he said.

He emphasised that the CCJ was not in competition with national courts of ECOWAS member states, while it was also not an appellate court to national courts.

The CCJ is the principal legal arm of ECOWAS, clothed with the mandate to provide relief for citizens of the 15 ECOWAS member states whose human rights, as enshrined in the ECOWAS Treaty, protocols and other international conventions, have been violated by their countries.

It started in 1991 as an inter-state court with the mandate to interprete ECOWAS treaties and protocols.

The jurisdiction of the court was expanded in 2005 to include the hearing of alleged human rights violations by member states against their citizens.

The external court sessions have been regular features of the CCJ since 2007.

The CCJ is an international court, with its jurisdiction clearly defined by the ECOWAS revised treaty and protocols.

In view of that, only member states and ECOWAS institutions have capacity to initiate actions before the court.

“Individuals can now come to the court to vindicate their rights. About 95 per cent of the cases before the court are in respect of human rights violations within member states against community citizens,” Justice Asante said.

He, however, stressed that the CCJ was not mandated to hear appeals against decisions of courts in member states.

Ahead of the hearing, Justice Asante explained to the Daily Graphic that a person seeking redress from the CCJ must initiate the case at the CCJ but must ensure that the same action was not before a national court in a member state.