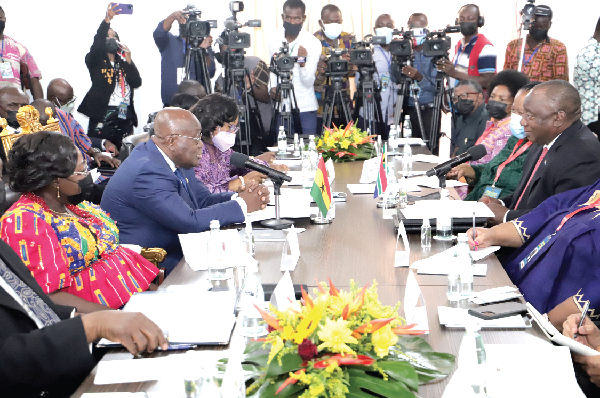 The South African President, Mr Matamela Cyril Ramaphosa, has called on Ghanaians to invest more in his country to reflect the high number of South African companies operating in Ghana.

He cited statistics from the Ghana Investment Promotion Centre (GIPC), which indicated that over 200 South African companies had registered their businesses in Ghana.

According to the centre, the companies undertook 170 projects, with a capital investment in excess of $1 billion, within the last 10 years, employing about 20,000 Ghanaians.

“It is my wish that there would be similar Ghanaian companies registering and doing business in South Africa, so that we have a two-way type of exchange,” President Ramaphosa said, adding that in the last quarter of 2020, South African companies were awarded three projects, contributing $242 million to Ghana’s foreign direct investment.

He made the call when he joined President Nana Addo Dankwa Akufo-Addo to inaugurate the Ghana-South Africa Bi-national Trade Commission at the Jubilee House in Accra.

It formed part of the three-day State Visit to Ghana by Mr Ramaphosa, who led a 200-man business delegation to Accra to enhance trade, diplomacy and cultural co-operation between the two countries.

The South African President further said it was important that Ghana’s processed products “fill the shelves of shops in South Africa” under enhanced trade between the two countries.

He mentioned Ghana’s “delicious chocolate” and other processed products as some of the items Ghana could export to derive maximum benefits and also avoid the situation where some African countries mainly exported raw cash crops and fruits to other countries.

The commission, jointly chaired by Presidents Akufo-Addo and Ramaphosa, will serve as a framework for regular interaction between the two countries on trade and investment and other areas of interest.

Four sector ministers each from the two countries signed agreements on immigration, agriculture, transport and gender.

Agreements on defence and visa waivers are also expected to be signed soon through a virtual platform.

According to Mr Ramaphosa, the two countries also discussed new areas of cooperation, such as railway infrastructure, mining, energy, manufacturing and agro-processing.

He said another issue that was deliberated upon was the empowerment of women, “where we keep learning quite a lot from what you are doing to empower the women of Ghana”.

Mr Ramaphosa commended President Akufo-Addo for making Ghana the hub of African trade by hosting the Secretariat of the African Continental Free Trade Area (AfCFTA), as well as his role in the promotion of peace and stability in the West African sub-region in his capacity as the Chair of ECOWAS.

President Akufo-Addo said under the commission, several institutional mechanisms were going to be established to sustain the dialogue between the two countries.

“Just as the early leaders of our two nations were united by their common determination to free our people from foreign domination and racist exploitation, we are united in our determination for rapid economic development,” he said.

According to the President, that would be achieved through value addition of products, industrial transformation of the economy anchored on items Ghana produced and grew to help derive maximum benefits from the abundant natural resources in the country.

He assured the visiting South African delegation that Ghana would continue to collaborate with South Africa to find solutions to challenges such as widespread poverty, irregular migration, insecurity and human rights violations.

Other areas, he said, were terrorism and violent extremism, human and drug trafficking, piracy and climate change.

On security, President Akufo-Addo said the increasing violent conflicts being witnessed on the African continent meant it was “not the time for the UN Security Council to reduce its peacekeeping mandate on the continent”.