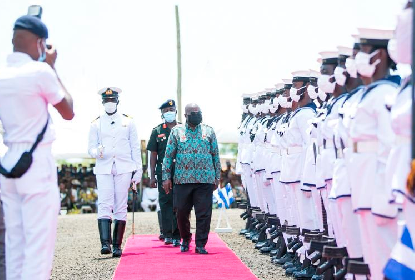 The President, Nana Addo Dankwa Akufo-Addo, has said the nation deserves a better maritime sector that is well equipped to deal with all forms of threats in its territorial waters.

He said the intent to resource the industry had necessitated the establishment of a modern Naval Training Command to develop the human resource of the navy to deal with the threats competently and efficiently.

At the inauguration of the first phase of the Naval Training Command at Nutekpor, near Agordomi, in the South Tongu District of the Volta Region yesterday, the President said "we need every naval officer or sailor to be equipped with creative solutions to deal with present and future maritime security challenges”. 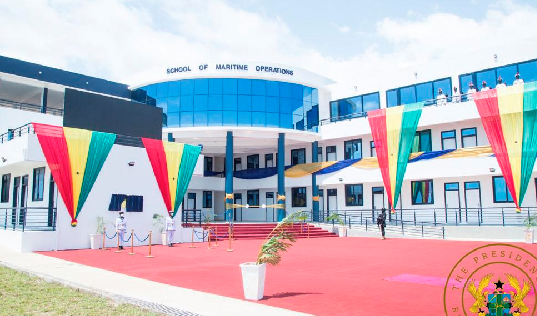 The Naval Training Command at Nutekpor

The training command is to accommodate all the training schools of the navy under a unified command to improve the development of human resource of the navy and other stakeholders in the maritime industry.

President Akufo-Addo said the establishment of the training facility was one of the most important decisions the government had taken through the Ministry of Defence and the military high command.

Present at the inauguration were other service commanders.

The President also inaugurated a 60-bed capacity municipal hospital at Wheta in the Ketu North Municipality constructed at a cost of €14.5 million.

The President said the increase in economic activities in the maritime environment, especially in the oil and gas and fisheries sectors, and their accompanying security challenges demanded the presence of a well-trained maritime force for the purpose of offering enhanced protection.

He noted that since the production of oil in commercial quantities about 13 years ago, the sector had developed into an important one that was contributing to the growth and development of the country, stressing that it was providing significant revenue to the government and offering jobs and sustainable livelihoods for many Ghanaians.

However, the security challenges and transnational crimes such as illegal fishing, drug trafficking, kidnapping at sea for ransom and terrorism, he noted, were threats occurring across international and territorial waters, which also affected the economy of the country and ought to be dealt with using modern methods.

The newly constructed training command, therefore, would accommodate all other training schools of the navy under a unified command that would transform the maritime industry through a well-trained human resource, he said.

The command, President Akufo-Addo said, would serve as the nerve centre of navy training doctrine and instil core navy values such as loyalty, devotion and excellence in the officers.

“The seven schools under the training command will be equipped to leverage technology and use new training methodologies to enhance learning and achieve greater efficiency in line with the government’s agenda of technology and digitisation,” he said.

"As an evolving institution, this command will be the mechanism of change in the navy,” President Akufo-Addo added.

The facilities completed for use include a naval training command headquarters, school of maritime operations, accommodation for students and instructors, a medical centre, naval recruits training school, an administration block, a naval mess and a library.

The second phase will comprise a school of marine and electrical engineering, a school of supply application, special forces training school, a shooting range, barracks and a swimming pool, among others.

The successful completion of the remaining facilities, President Akufo-Addo said, would make the command a training centre of excellence, attracting trainees from the security services and marine stakeholders from within and outside the country.

The Minister of Defence, Mr. Dominic Nitiwul, said the training command was in line with the President’s commitment to develop the human resource of the country.

“The Free Senior High School policy and investments in education are testimonies of the government’s commitment to human capacity development,” he said.

Rear Admiral Amoama said the project had been a vision of many of his predecessors.

However, the first phase of the infrastructure development of the command started in September last year.

• The Naval Training Command at Nutekpor