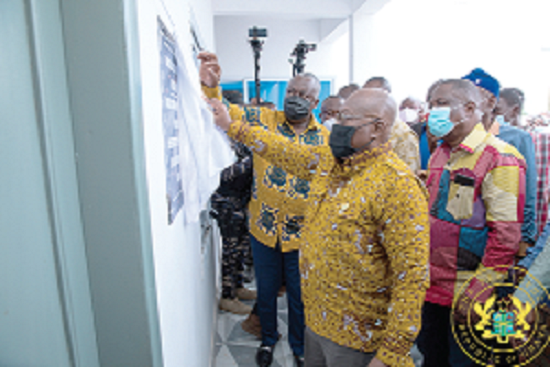 President Akufo-Addo unveiling the complex. On is right is Anin Yeboah, the Chief Justice
30.5k Shares

The dual court complex will house the Municipal Court and an additional Court to be determined by the Chief Justice.

The construction of this complex forms part of measures being put in place by the government to ensure ease of access to law courts to advance the rule of law in the country.

In his Message on the State of the Nation, on March 9, 2021, President Akufo-Addo said that the government, through the Ministry of Local Government and the District Assemblies Common Fund, had commenced an initiative to construct 90 courts with accompanying accommodation for judges across the country, to help address the problem of inadequate court infrastructure.

The structures, he intimated, are at advanced stages of completion.

Additionally, the President, in April this year, cut the sod for the construction of a permanent, modern Court of Appeal complex in Kumasi, which will help improve the justice delivery system for the northern sector of the country.

Again, with the collaboration of the Ministry of Local Government and Rural Development, and the District Assemblies Common Fund, 20 townhouses and a guesthouse are being built to be used as permanent residences for Court of Appeal Judges based in Kumasi, who will be mandated to handle cases in the northern part of the country.

Once completed, it will mean that appeals from Upper West, Upper East, Savannah, North East, Northern, Bono, Bono East, Ahafo, Western North and Ashanti Regions will be conveniently heard within a much shorter period. Whilst in Prang, in the Pru West constituency, President Akufo-Addo also inaugurated a newly constructed Administration Block for the Regional Feeder Roads Department.

Constructed at a cost of GH¢3,831,826.86, the completion of the administration block is in fulfillment of a pledge made by the President to decentralise the siting of state institutions in various parts of the newly created regions, instead of the capital, which has always been the norm.

Earlier the Paramount Chief of the Prang Traditional Area, Nana Kwadwo Nyarko III, expressed his gratitude to the President for establishing a starch processing factory in his district under the “One District, One Factory” initiative.

Receiving the President at his palace, Nana Nyarko also thanked the President for solving the perennial water shortage in the traditional area.

“Mr President, as part of improving the perennial water shortage that was a nightmare in Prang, you have successfully constructed the Prang Small Town Pipe Water System Project. The people of Prang now have running water in their homes, all year round” he said.

He also indicated that several mechanised boreholes and hand pumps had been constructed across the district, supplying potable water to the people in Pru West.

Touching on agriculture, the Paramount Chief noted that the Pru West District had received two farm tractors and other farm implements, and had started an Agriculture Mechanisation Centre, which was helping farmers plough their fields at subsidised rates.

“Mr President, with the free SHS education programme, Planting for Food and Jobs and Planting for Exports and Rural Development, my people who are mostly farmers are grateful to you”, he added.