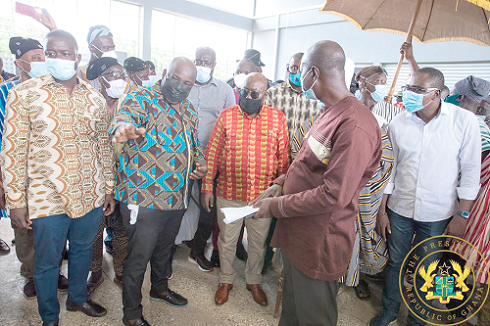 President Akufo-Addo (middle) being briefed on the production processes at the Rice Processing Plant in Savelugu. Inset: The plant

President Nana Addo Dankwa Akufo-Addo last Saturday rounded up his two-day tour of the Northern Region with the commissioning of a GH¢7.3 million rice processing plant and the inauguration of a GH¢6.04 million Technology Solution Centre (TSC), both in Savelugu in the Northern Region.

The plant was constructed under the government’s one-district, one-factory (1D1F) programme, while the TSC was established under the Rural Enterprises Programme (REP), with funding from the African Development Bank.

The rice processing factory has the capacity to process between 1.5 and 2.8 tonnes of rice an hour. It comprises processing plants, modern parboiling, milling and packaging plants.

About 200 people, including management professionals, factory floor workers and plantation workers, are expected to be employed to work at the facility, with over 600 farmers from Savelugu Municipality and neighbouring communities expected to be directly engaged to supply paddy rice for processing.

The facility has a standby generator plant and a mechanised borehole to supply the facility with water. It also has a fully furnished office accommodation, a conference room, laboratory and a canteen/kitchen.

The Savelugu TSC, which is one of the five new facilities being established by the REP, is to support the government's industrialisation agenda, particularly the 1D1F initiative.

The key functions include production of spare parts and repair services for district factories and the oil & gas industry, manufacturing of agro-processing equipment, provide training for human resource capacity building.

To enhance and increase the number of trainees, hostels facilities have been provided for both males and females at five of the older TSCs; and to admit trainees from within and outside the districts/municipalities where they are located.

Inaugurating the facilities, President Akufo-Addo indicated that the initiatives were part of efforts by the government to transform the industrial sector of the national economy to create job opportunities for the teeming unemployed youth and ensure prosperity for all.

While thanking the Paramount Chief of the Yoo Traditional Area, Naa Abdulai Andani, for allocating 2,000 acres for the construction of the factories, he promised the people of the area other projects that would come on board to improve on their fortunes.

For  his part, Naa  Andani expressed his appreciation to the President for the establishment of the facilities, stating that  they would increase the income of rice farmers and create employment for the people in the area.