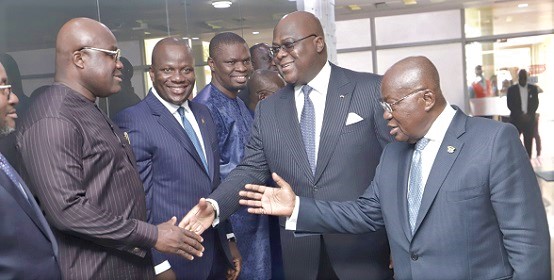 President Nana Addo Dankwa Akufo-Addo has called on the Democratic Republic (DR) of Congo to collaborate with Ghana to devise a lasting means to deal with rebels and jihadists wreaking havoc on West and Central Africa.

He said the increasing jihadist threat in the Sahel and the central part of Africa had provided the two countries with an opportunity to have a clear idea and to work together to rid the continent of a menace that is impeding development and progress.

President Akufo-Addo made the call during a bilateral meeting between him and his DR Congo counterpart, President Felix Antoine Tshisekedi Tshilombo, at the Jubilee House in Accra as part of the official visit of DR Congo’s President to Ghana.

President Tshisekedi Tshilombo is leading a delegation of government officials, including ministers of state, for a three-day official visit to Ghana.

President Tshisekedi Tshilombo was received at the foyer of the Jubilee House by President Akufo-Addo, and was given a red carpet welcome by a contingent of personnel of the Ghana Navy neatly dressed in their ceremonial white apparel.


There was a special performance, with the navy band playing the DR Congo national anthem, at the same time as some officers also fired a 21-gun salute in honour of the visiting President.

After the formal exchange of pleasantries, the two presidents held a tete-a-tete, while the Ghanaian officials and their DR Congo counterparts went to the auditorium to commence the bilateral meetings.

Halfway through the bilateral talks, President Akufo-Addo and his guest joined in the talks.

In their brief public addresses, President Akufo-Addo stressed the need for Ghana and DR Congo to work on other areas of mutual interest for their countries and people.

Tracing the relations between the two countries to the pre-independence era, he said it was important for the relationship to be strengthened and made to be mutually beneficial.

He mentioned other spheres that the two nations could collaborate and work to include economic development and mining, noting that “we hope this visit is going to be an initiative that would facilitate better understanding between our two countries”.

President Tshisekedi Tshilombo appealed to Ghana to use its global influence and position as a member of the UN Security Council to secure peace and stability in his country.

He alleged that Rwanda was supporting rebels to inflict pain and suffering on innocent Congolese, a claim he said had been verified by United Nations experts.

He also expressed regret that Rwandans were paying back his country’s hospitality offered them in the past, with support for rebels to attack DR Congo, explaining that the latter opened its doors on humanitarian grounds for Rwandans who were fleeing the genocide that rocked the country in 1994.

President Tshisekedi Tshilombo urged Ghana to use its position on the Security Council to ensure that Rwanda was sanctioned by the UN.