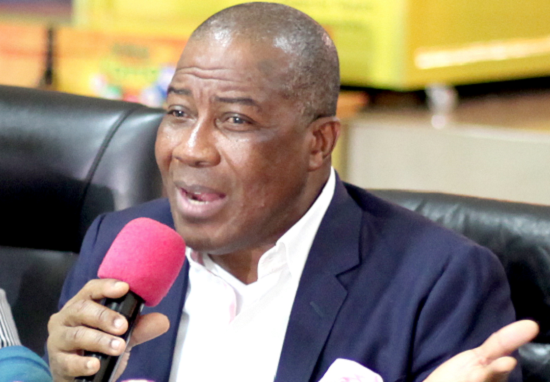 The Presidency has directed the Director-General of the National Lottery Authority (NLA), Kofi Osei Ameyaw to hand over to the Finance Director of the Authority, Mr Ernest Mortey after his one-year contract elapsed in February this year.

The directive was contained in a letter dated March 10 and signed by the Secretary to the President, Nana Bediatuo Asante.

The letter said the one year contract given to the former New Patriotic Party (NPP) Member of Parliament for Asuogyaman expired on February 20, 2021, and as a result, he retired on that date.

“Upon reaching the compulsory retirement age of sixty years on 20th February 2020, the President of the Republic, by letter dated 3rd September 2020, under my hand, granted you a one-year contract of service as Director-General of the National Lottery Authority. The one-year contract elapsed on the 20th February 2021, and therefore, you retired on that date.” the letter said.

The letter further directed Mr Ameyaw to proceed to collect any benefits due him in retirement.

The President also expressed gratitude to him for his service to the nation and wished him well in his future endeavours.

The directive comes after the former MP wrote to the President on March 9, 2021, to remind him of the end of his contract date of February 20, 2021.

He also thanked the President for the opportunity to serve him and the nation.

Meanwhile, Mr Osei Ameyaw’s Deputy at the NLA, Yaw Amoakohene Baafi, has had his appointment terminated by the Presidency.

The letter addressed to Mr Yaw Amoakohene and also signed by the Secretary to the President reads: “Due to the re-organisation of the Authority, I am to inform you that the President has terminated your appointment with immediate effect. You are directed to proceed to collect your terminal benefits in lieu of notice”.

He was appointed Deputy Director-General of the NLA on April 4, 2017.

On March 1, some staff of the Authority withdrew their services to protest and demanded the immediate dismissal of the Director-General, Mr Osei Ameyaw over the non-payment of lottery winnings

They alleged that some of their members have received threats and in some instances been attacked due to the development.

“Our lives are under threat. The Managing Director has refused to pay lotto wins. The winners of the lottery are attacking our colleagues all over the country. This protest is happening across the regions. We are not working today”, the Chairman of the NLA staff union, Eric Tamakloe said.

“We are withdrawing our services from NLA. What we are doing is not in contravention of the law. Mr Ameyaw must go, and we want that to happen now. The President must ensure that. Enough is enough”.