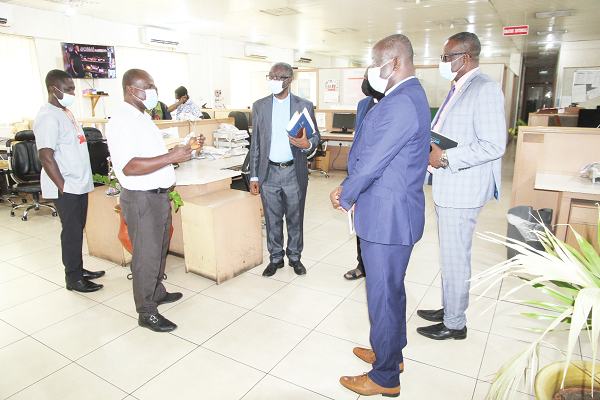 The Presbyterian Church of Ghana (PCG) wants the government to step up efforts at dealing with the issues of land guards, water pollution and sand winning in the country.

Doing that, it said, would help bring about peace, restore and protect the environment, as well as safeguard the health of the people.

The church said while in some parts of the country land guards were illegitimately taking lands and properties for which people had toiled, illegal mining and sand winning were degrading the environment and opening it up to both climate change and also health concerns.

The Chairperson of the Ga West Presbytery of the PCG, Rev. Daniel Kwasi Amoako Nyarko, made the appeal when he, in the company of other senior officials from the presbytery, paid a courtesy call on the management of the Graphic Communications Group Limited (GCGL) in Accra last Thursday.

Rev. Nyarko was accompanied by the Clerk of the Ga West Presbytery, Rev. Joseph Kofi Antwi (PhD); the Lay Representative of presbytery to the General Assembly Council of the PCG, Mr Ben Botwe, and the Chairman of the Fifth Anniversary Planning Committee of the presbytery, Rev. Kwadwo Owusu Sarpong.

The team was received by some management members of the GCGL, led by Mr Franklin Sowa, the Director of Marketing.

The rest of the GCGL team were Mr Kwaku Ofosu, the Sales and Circulation Manager; Mr Isaac Yeboah, the Editor of Graphic Online; Ms Adwoa Serwaa Bonsu, the Editor of the Graphic Showbiz, and Ms Mavis Asiama Wiafe, a Senior Corporate Communications Officer.

The Ga West Presbytery team was at the GCGL to officially brief the company on the fifth anniversary of the presbytery and seek the company’s support for the event and other activities that it had been undertaking.

Rev. Nyarko expressed concern over the fact that many people had been maimed by land guards in many places, particularly in the Ga West areas, saying that the situation needed the urgent attention of law enforcement agencies and the government.

He said although there were laws to deal with land guards, the enforcement of such laws had become a problem, giving the land guards a field day to operate.

“We all know them (land guards); they are in society and they live in the communities,” he said.

He added that land guards ware not taking the lands of only individuals but also those of the church.

Rev. Nyarko also expressed concern about the increasing practice of sand winning in many parts of the country, noting that that practice, if not checked, would render many arable lands barren.

He said because of sand winning, many farmers in the affected areas could not plant cash crops, as the top soil had been removed through sand-winning practices.

On water pollution, Rev. Nyarko said duty bearers ought to act swiftly to save people from water-borne diseases as a result of their dependence on polluted water.

He said unlike in the cities where people had access to treated water, many residents of the hinterlands relied solely on water from rivers and streams which had been polluted through illegal mining activities, rendering such water bodies unsafe for drinking.

Rev. Nyarko commended the GCGL for its key role in the development of the country, noting that the group had, over the years, become the channel through which the voices of the vulnerable were heard.

He said the Ga West Presbytery of the PCG would continue to be a key partner to the GCGL as they both sought the improved welfare of Ghanaians.

Rev. Antwi said the presbytery had, since its inception, undertaken a number of developmental projects in its catchment area, including the provision of toilets and bathrooms at Abossey Okai in the Adabraka Official Town District, a borehole at Tete Kofi in the Mission Field of the church and the cultivation of coconut, pawpaw and mango at Akweiman and Okaijaman.

He said the presbytery had also been promoting healthy relations with people of other faiths, establishing peace clubs in schools, as well as extending evangelism programmes to palaces, markets, hospitals, prisons and mosques.

Mr Sowa commended the Ga West Presbytery for its support to the Graphic Needy Fund, saying that when the company sought financial assistance from the church, the church readily came in to help.

For him, there were many areas the church and the company could collaborate, pointing out that the GCGL alone could not foot the bills of all the needy people who sought assistance from the company, and that it would require the support of other benevolent organisations, such as the church, to be able to do that.

Mr Sowa used the opportunity to invite the PCG, particularly the Ga West Presbytery, to join a sanitation campaign the company would soon launch to help clean the country.