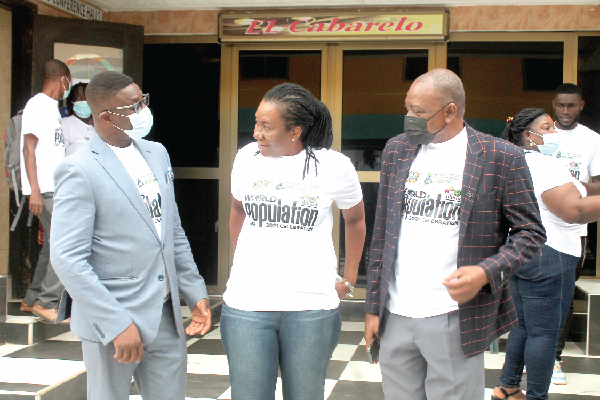 The Executive Director of  the National Population Council (NPC), Dr Leticia Adelaide Appiah, has called for a national dialogue on how to prioritise reproductive health by putting it on the front burner and creating the enabling environment to deepen its practice.

Dr Appiah said political will and public understanding of family planning and reproductive health were the foundation on which to prioritise family planning in the national development agenda.

Speaking at a forum to commemorate this year’s World Population Day at Dodowa in the Shai Osudoku District last Monday, she stressed,“reproductive health and family planning are not sustainable but evidence abounds that sustainable development is extremely difficult without giving the appropriate attention to reproductive health and family planning.”

She said a national dialogue was critical because sustainable development was extremely difficult without giving the appropriate attention to reproductive health and family planning.

Dr Appiah said the dialogue would help deepen public understanding to create the enabling environment to expand its practice, and that it would also help to institute a well-coordinated and sustained reproductive health/family planning programme spearheaded by the government and supported by development partners.

This year’s commemoration was on the theme: ‘’Prioritising Reproductive Health is an answer to Rights and Choices”.

The NPC organised the forum in collaboration with its partners, including the Planned Parenthood Association of Ghana, the National Development Planning Commission, the Ghana National Petroleum Commission, the United Nations Population Fund (UNFPA) and the Office of the President.

Dr Appiah said the NPC and its partners were optimistic that a national dialogue on how to prioritise reproductive health would also help to increase political and societal will in the acceptance and adherence to family planning and reproductive health.

“Should we continue to ignore the important role of reproductive health and family planning under the guise of culture? The National Population Council and its partners hope not,” she said.

“In consonance with this, the National Population Council is of the opinion that prioritising reproductive health is not just an answer, but a clarion call. It will save our national health insurance, reduce cost of inequality, give us value for money in education, reduce unemployment, keep our environment safe, and most importantly, keep us healthier, happier and more prosperous,” Dr Appiah stated.

For his part, the Member of Parliament (MP) for Wa Central, Dr Abdul Rashid Pelpuo, noted that prioritising reproductive health was more appropriate because investments in that area of health would empower people, particularly women and adolescents, to make the right choices, leading to improved family life and well-being.

Dr Pelpuo, who is also the Ranking Member for Lands and Forestry and Chairman of the Population and Development Committees in Parliament, said it was often assumed that national budgets were neutral and affected both males and females in the same way.

He explained that since males and females had different needs, aspirations and experiences in life, the national budget affected them in different ways through the pattern of resource allocation.

The Wa Central MP, therefore, called for the adoption of a gender budgeting tool to address concerns of less privileged groups in society, including women, children, disabled persons and poor persons.

“I will encourage Members of Parliament to participate effectively at the formulation stage by submitting memoranda expressing their views on issues such as rural and urban migration, child marriage, maternal health, few women in public position, climate change, among others,” Dr Pelpuo stated.

He said people in that group who were the future leaders and valuable assets, faced challenges associated with sexual and reproductive health, HIV and sexually transmitted diseases, nutrition, violence, substance abuse, inequalities and the likes which needed to be addressed.

Mr Ojuolape said the COVID-19 pandemic had exposed weaknesses in health care systems, and globally serious gaps and challenges in the provision of sexual and reproductive health services for women and girls.