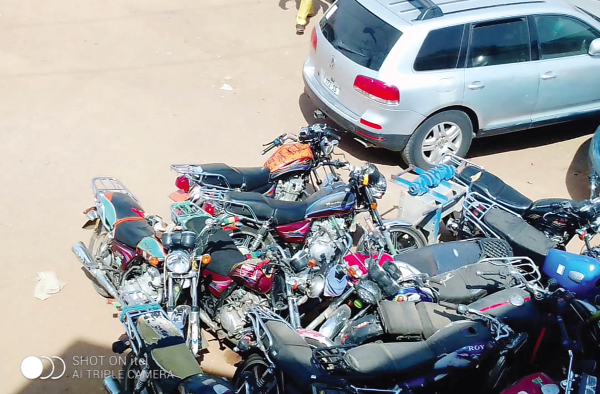 Some motorbikes impounded by the police
30.5k Shares

Thirty-two suspected criminals have been arrested within the Kasoa enclave in the last few days as the police move to rid the area and its surroundings of criminals who are turning the area into their safe haven.

Yesterday, 30 people were arrested at Ofaakor, near Kasoa in the Central Region, while two people allegedly linked to previous crimes were also picked up at Buduburam and Kasoa Estates last Tuesday.

While a police operation in the wee hours of yesterday led to the arrest of the 30 suspects, police intelligence also resulted in the arrest of Eric Asare, alias Fanta Mogya, who is alleged to have been involved in the robbing and brutal killing of a 45-year-old businessman at the Opeikuma Junction traffic light on March 31, 2020.

Another suspect, Kofi Appiah, alias Aboagye Dacosta or Nana, was picked up from his hideout at the Kasoa Estates Junction for possessing 10 bundles of GH¢50 notes suspected to be fake.

He has been detained for further investigations.

The 30 suspects include six women, who were picked up at various hideouts in the Ofaakor area.

During the operation, the police found  and confiscated slaps of a substance suspected to be Indian hemp, six motorbikes, two of which were unregistered, and  offensive weapons.

The Ofaakor District Police Commander, DSP Samuel Amfo, told the Daily Graphic that the suspects were arrested in both completed and uncompleted buildings.

“For now, we are screening them, after which those who will be found culpable of criminal offences will be put before court,” he said.

The police also found four slabs of Indian hemp in the room of one of the females arrested.

DSP Amfo said the police would continue their operation, since Kasoa and its surroundings had been “infected with criminals from other regions and areas and have relocated here”.

“We will make their hideouts uncomfortable for them,” he said.

Ofaakor being a newly developing area, he said, had become a safe haven for the criminals who were occupying all kinds of structures in the area, saying it was from those structures they attacked people, especially at night.

“Most of the houses are uncompleted and so criminals find safety in those places which were not even given to them by the owners. They enter the structures and occupy them by force,” he said.

DSP Amfo gave an assurance that the swoops would be carried out twice or three times a week.

In a related development, the Central Regional Police Command has said it will set up tent cities in the Kasoa enclave to increase police patrols and visibility as part of strategies to combat increasing criminal activities in the area.

Already, police surveillance has established where these tent cities will be set up.

These "tent cities", which will serve as host shelters for policemen at strategically designated parts of the Kasoa area, are expected to help bring policemen closer to the communities to improve surveillance and possibly reduce the crime rate in the area.

The Central Regional Police Commander, Deputy Commissioner of Police (DCOP) Habiba Twumasi-Sarpong, at a press briefing in Cape Coast last Tuesday, said as a first step, the police hierarchy had augmented the number of personnel in the two Kasoa divisions to help fight crime effectively.

She said the police were also working with chiefs in the area to start watch committees in the communities to augment the efforts of the police.

DCOP Twumasi-Sarpong further stated that media education and community engagements were ongoing within the enclave to ensure stakeholder collaboration for effective policing.

She further intimated that  the police command, with support from the police hierarchy, had cultivated more informants to help the police gather information in their effort to reduce crime.

DCOP Twumasi-Sarpong indicated that those measures had already led to the arrest of a suspect, Asare, who had been implicated in the killing of a businessman, Mr Stephen Entsi, who was going to meet a business partner when he was robbed, shot and killed by unidentified assailants on motorbikes.

DCOP Twumasi-Sarpong said on April 19, 2021, the Kasoa Divisional Police Command, acting on intelligence, arrested the suspect from his hideout at Buduburam for his suspected involvement in Entsi’s killing.

In another development, she said, the Criminal Investigations Department of the Kasoa Command, at 9 a.m. on April 20, 2021, arrested a suspect, Kofi Appiah, alias Aboagye Dacosta, at his hideout at the Kasoa Estates Junction for a number of criminal activities in which he was involved.

Kasoa and its environs have been in the news for their high crime rate. A former Central Regional Minister, Mr Kwamena Duncan, had, on several occasions, cited the area as the region’s security problem.

Recently at Kasoa, two teenagers were arrested for the murder of a 10-year-old boy, resulting in a loud public outcry for enhanced security in the area.

DCOP Twumasi-Sarpong assured residents of Kasoa and its environs that the police were working hard to safeguard the peace and security of residents of the area.

She also appealed to them to support the police especially with information on crimes to ensure improved security in the area.