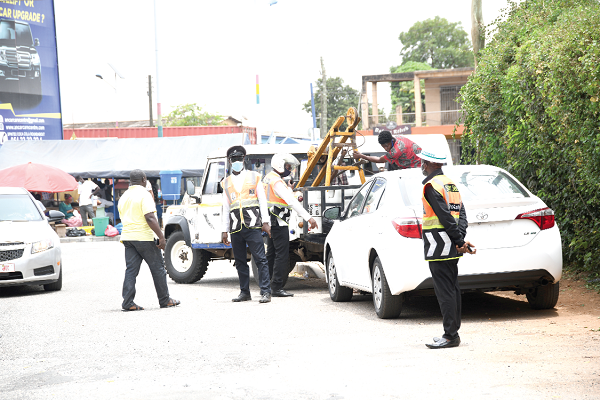 A vehicle parked at the way side being prepared to be towed while DSP Francis Aboagye and his men look on. Picture: EBOW HANSON
30.5k Shares

A team from the Tesano Division of the Motor Traffic and Transport Department (MTTD) of the Ghana Police Service and the National Road Safety Authority (NRSA) conducted a swoop Wednesday, March 17, on car dealers who were operating illegally along residential streets in Tesano.

The car dealers, who have turned some of the streets in the community into sales points for ‘used vehicles’, are also accused of taking advantage of the presence of registered garages located in the area, including De Georgia Motors Limited and Aniropa Autos Limited, to promote their car sales.

Nineteen cars were impounded in the exercise, which lasted about two hours, and sent to the Tesano Police Station.

In an interview with the Daily Graphic, the Tesano MTTD Commanding Officer, DSP Francis Aboagye, who led the exercise, said those who owned the cars would be arraigned to help resolve the illegal on-street car dealing activity permanently.

"Now that the cars have been impounded, the real owners will come forward and we will send them to court for the law to deal with them," he said.

He explained that the exercise had become necessary following complaints from residents regarding obstruction to their homes as a result of the on-street car sales activity and the multiple warnings to the dealers to cease operating in the area.

He said the police had embarked upon many measures in the past to stop the car dealers, including arrests, confiscation of cars, prosecution and court fines, and yet they would not budge.

To ensure that the dealers did not return after yesterday’s raid, DSP Aboagye said, the police would patrol the area to make sure the dealers had been removed once and for all.

“The situation has become a nuisance and a danger to road users and residents of the area through the road obstructions they cause,” he said.

The street evacuation exercise followed a publication in the Daily Graphic on March 6, this year, which shed light on the activities of the unauthorised car dealers whose parked vehicles were blocking entrances to people’s homes, as well as causing pollution, thereby impacting negatively on the environment.

The police swoop commenced about 11 a.m. with about 16 uniformed policemen from the Tesano MTTD and a team from the NRSA.

On seeing the team of law enforcers, some of the car dealers quickly moved their vehicles to escape arrest and parked them about 400 metres away.

Others threatened to ‘deal’ with anyone who insisted that they vacate the area, including the Daily Graphic team that was covering the exercise.

The Okaikwei North Municipal Chief Executive, Mr Boye Laryea, who arrived on the scene in the course of the exercise, told the Daily Graphic that none of the car dealers selling on the streets in the area had been issued a permit.

He said the assembly was concerned about the activities of the car dealers and the emotional tension between them and  residents of the area.

“We have not given permit to anyone to sell cars here. I know it is not right and so I can't do that," he said

Mr Laryea said he was not happy with the situation, especially the impunity with which the dealers went about their business.

Meanwhile, in a separate interview, a member of the Tesano Residents Association (TRA), who wanted to remain anonymous, said even though the exercise was timely and necessary, it was not likely to permanently resolve the situation.

He said similar exercises in the past did not achieve any success and had rather emboldened the car dealers.