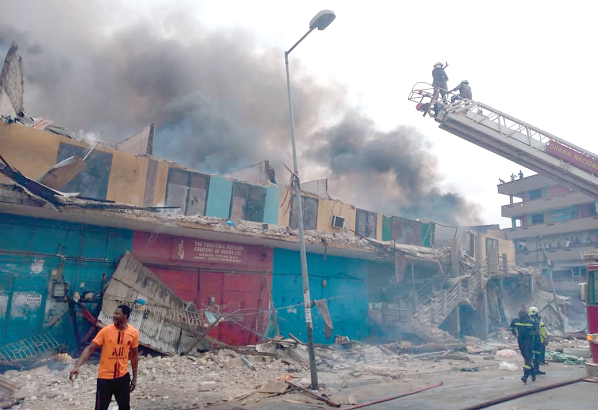 The police in Kumasi have picked up two suspects in connection with last Sunday’s fire incident which affected more than 30 shops in a building at Aboabo, in the Asokore-Mampong Municipality.

The suspects, whose identities are being withheld for security reasons, are currently in police custody assisting with investigations.

They are being held for negligently causing the fire which destroyed items worth millions of Ghana cedis.

The Manhyia-Zongo Divisional Police Commander, Assistant Commissioner of Police (ACP) Mr Kwaku Buah, who confirmed the arrest to the Daily Graphic, said due to the nature of the environment and the value of items destroyed, “it would not be prudent to disclose their identities for now.”

He said, however, that one of those arrested was a shop owner while the other was an electric welder working in the shop when the incident occurred.

“They are currently in our custody and assisting us to arrive at the cause of the fire,” he said.

About 11 a.m. last Sunday, a storey building which houses a number of stores dealing in building materials caught fire.

The fire was alleged to have been ignited by sparks from a welding machine that was being used by a welder on one of the shops.

It took personnel from the Ghana National Fire Service (GNFS) more than three hours to bring the fire under control due to the combustible nature of the materials in the affected shops.

Items that got burnt in the shops included rice, oil, soap, building materials and plastic wares.

The situation was made arduous by the actions of some shop owners and the youth in the area who got involved in fighting the fire.

The GNFS had to call in the police and the military to keep the residents at bay and to cordon off the area so that personnel from the fire service could work without hindrance.

Six fire engines were deployed by the fire service as well as a table turner to enable them to reach the top of the building to quench the fire.

According to the Ashanti Regional Public Relations Officer of the GNFS, Divisional Fire Officer III, Mr Desmond Ackah, his men were able to bring the fire under control at about 12:30 p.m, and were able to completely extinguish it around 5p.m.

He said at about 6 p.m, the service had to use a bulldozer to pull down a part of the building which was posing danger to the public.

He explained further that the building had to be pulled down because it had developed cracks due to the intensity of the fire and could cave in any time if it was left standing.

Divisional Fire Officer III Ackah said preliminary investigations corroborated by eyewitness account indicated that the fire was started by the welder who was working in one of the shops on the first floor.

According to him, in the course of the welder’s work a fire had kindled but the welder had closed the shop to go in search of water.

“Before he could return with the water, the fire had spread to the other shops and engulfed the first floor,” he said.

Mr Ackah reiterated his call on the public not to hesitate to inform the service whenever there was a fire outbreak and advised them against wasting time trying to fight it on their own.

“We are here for you and every minute you delay in calling us matters,” he said.

Personnel from the National Disaster Management Organisation (NADMO) were at the site yesterday to help clear the debris and pave the way for the building to undergo assessment.

The Subin Sub-metro Zonal Coordinator of NADMO, Mr Abdul Basit Gariba Awudu, told the media that engineers would conduct structural assessment of the building to determine if it was still suitable for habitation or had to be pulled down.

According to him, NADMO was there to help clear the area and have a needs assessment done to find out if the occupants of the building would need aid, “then the right people would be contacted to assist.”