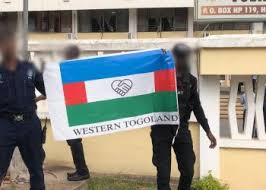 The police have picked up 21 persons to assist investigations into the abduction of three police officers and road obstructions at entry points into the Volta Region in the early hours of Friday.

The Volta Regional Minister and Chairman of the Regional Security Council (REGSEC), Dr Archibald Yao Letsa, said the security situation had been normalised, with the roads cleared.

Dr Letsa added that the unauthorised barriers and blockades erected by the Group at Sogakope, Tefle and Juapong had been cleared.

A Ghana News Agency report said the Sogakope Divisional Police Commander, Mr Dennis Fiakpui, who was among the abducted police officers, had been rescued and receiving treatment.

The Homeland Study Group Foundation, led by 83-year-old Charles Kormi Kudzordzi, has been championing an agenda to declare parts of the Volta and the Oti regions a sovereign state, with the name ‘Western Togoland’.

On November 16, 2019, the leader, with about 100 people in attendance at Moleme in Ho, unlawfully declared the Volta Region as a sovereign state of Western Togoland.

Following the declaration, seven persons were arrested and put before court for the offence of treason.

The Volta Regional House of Chiefs has however disassociated itself from the group.
In December 2019, members of the House unanimously declared that they owed allegiance to the sovereign state of Ghana.