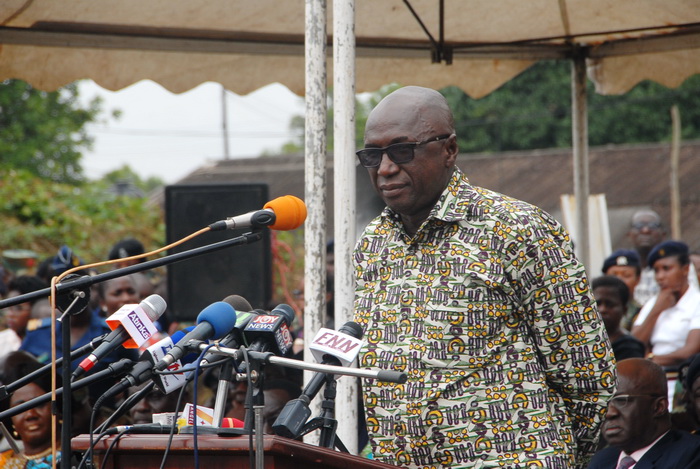 As part of measures to encourage police officers to accept posting to deprived communities in the country, the Minister of the Interior, Mr Ambrose Dery, has announced that policemen who accept posting to such areas will earn promotion a year ahead of their colleagues in the urban areas and cities.

He said the policy would, among others, target Police Constables and Chief Inspectors.

The minister was speaking at a meet-the-press event in Nandom in the Upper West Region last Monday.

Mr Dery, who is also the Member of Parliament (MP) for Nandom, expressed the hope that the policy would encourage more policemen to accept to serve in rural communities where their services were also needed.

“Ghana is for all of us and we must ensure that security is beefed up in every corner and frontier of the country, no matter the terrain,” he added.

A fortnight ago, the District Chief Executive for Adaklu in the Volta Region, Mr Phanuel Donkor, appealed for the posting of more policemen to the area.

He said the district had only three policemen who were task to ensure security in its 19 communities.

Police to cite leaders of political pressure group for contempt

Mr Dery gave an assurance that more policemen would be recruited and provided with logistics and equipment to enable them to give of their best, including fighting sophisticated crimes such as kidnapping, cyber crime and terrorism.

The minister advised the public to assist the police by volunteering information to enable the police to carry out their duties effectively.

For his part, Dr Salih commended the Nandom District Assembly for organising the event to showcase its achievements and the challenges hindering the accelerated development of the area.

He said since he assumed office in March this year, the Nandom press encounter was the 10th meet-the-press event he had attended to open up the work of the assemblies to public scrutiny.

Dr Salih urged the people to patronise the Ghana Card registration exercise by the National Identification Authority (NIA), adding that 382 stations had been set up for the exercise.

He also explained that the December 17 referendum was to help deepen the decentralisation process that was started some 27 years ago and, therefore, asked the people to come out in their numbers and vote ‘Yes’.

On health, the minister said a regional medical director was yet to be posted to the new regional referral hospital in Wa, even though the facility had been completed and given a licence to operate.