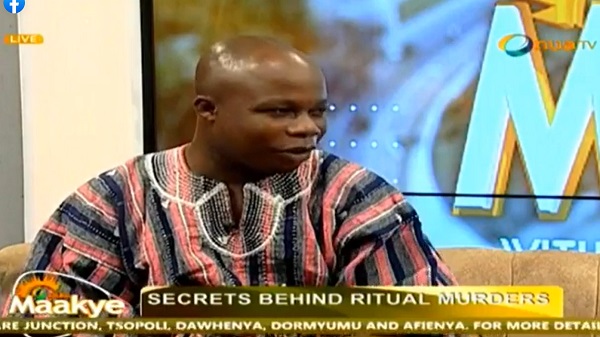 The Ghana Police Service has arrested a taxi driver for his alleged involvement in several ritual murders.

The taxi driver Felix Ansah will be put before court on Monday, September 13, 2021.

The Police in a statement said it had commenced investigations into "claims made by one Felix Ansah, a 35-year-old taxi driver, in an interview he granted on Onua TV, September 2, 2021, where he alleged that he had killed several persons for ritual purposes".

"Following his admission of the alleged commission of such acts, he was arrested to assist in Police investigations. He will be put before court on Monday, September 13, 2021, to be placed on remand for thorough investigations into the allegations to continue," the statement said.

In a September 2, 2021, simultaneous broadcast on Onua TV and Onua TV Facebook, Mr Ansah alias De-Ghosty in an interview on Onua Maakye with Captain Smart said he was a delivered fetish priest who had given his life to Christ and become a Pastor.

Among several stunning claims made in the interview, Mr Ansah claims to have buried a pregnant woman alive in a ritual to help a politician win an election.

He said the unnamed Ghanaian politician consulted him for help to win an election and he aided the politician by burying the pregnant woman alive which guaranteed victory.

Police arrest former spiritualist who claimed in a TV interview to have buried a married woman alive in order to help a politician to win an election. pic.twitter.com/q9sp9t40XT

However, the former spiritualist did not disclose the name of the politician at the prompting of the host Captain Smart.

Discussing the topic SECRETS BEHIND RITUAL MURDERS, Mr Felix Ansah also claimed to have been involved in other ritual murders.

He also listed the human parts and costs that were needed for certain specific rituals and how ritualists kidnap children in the broadcast.