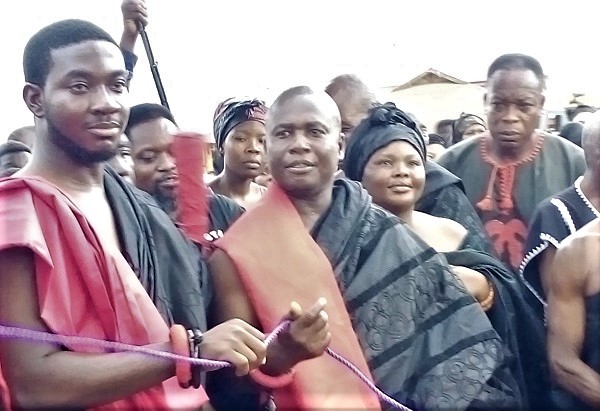 The Divisional Chief of Plau in the Yilo Krobo Traditional Area in the Eastern Region, Nene Tetteh Djaba Agbleze IV, has called on citizens of the area to continue to be law-abiding and ensure the peace and development of the area.

‘‘A traditional area that is full of disturbances and acrimony does not promote development. We the citizens of the Yilo Krobo Traditional Area from time immemorial have been peace loving.

‘‘As a new divisional chief of Plau, I would not deviate from the good work my predecessors did but to surely continue from where they left off and ensure that the legacy of peace and harmony they left behind are maintained if not improved,” Nene Agbleze said.

Nene Agbleze made the remarks at a durbar at his palace at Plau in Somanya where he officially announced the death and the funeral rites of his predecessor, Nene Tetteh Agbleze III, popularly known as King Jaja or King Zee, who was enstooled in 1964 and ruled for 56 years until his demise in 2020.

Nene Agbleze used the occasion to unveil the funeral banner of his predecessor at Somanya Roundabout in the Plau Divisional Area for the funeral slated for March 28 to April 13, this year.

Nene Agbleze said there would not be any funeral celebration within the Plau Division from March 14 to April 13.

He, therefore, advised citizens who scheduled their funerals within that period to reschedule them for orderliness.

He also cautioned against other noise-making activities within the period, including loading at the Somanya Roundabout, and charged people of the area to ensure that they abide by the guidelines for a successful funeral of his predecessor when the time comes.

The assembly, he said, would maintain the highest level of discipline to promote peace and development in the municipality.

‘‘Nene, I, the MCE, on behalf of the assembly, would assure you that the assembly would ensure that it supports the Plau Division which you are leading, to perform the funeral of your late predecessor who served Yilo Krobo well during his lifetime,” the MCE added.